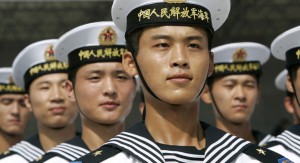 As Russia’s Caspian Sea fleet launched precision-guided cruise missiles at Syrian rebel positions, a Chinese naval vessel continued to loom menacingly in the background, maintaining its presence in the Mediterranean Sea amid Chinese denials that the People’s Liberation Army will enter the Syrian conflict.

A Middle Eastern defense official affirmed the Chinese military ship is located a short trip of several “hours” from the Syrian coast. The source, who spoke on condition of anonymity, said that while China’s intentions are unclear, the vessel’s presence is well known to Middle Eastern and Persian Gulf countries as well as to the U.S. and Russia.

The official said that China is reluctant to directly intervene in Syria or approach Syrian waters unless the regime of Syrian President Bashar al-Assad formally requests the assistance of Chinese military advisers.

Even then, China may only take on an advisory role and not carry out military missions alongside the Russians and Syrians, the official said.

Reconfirming information reported by WND last month, the official said another option being discussed is for the Russian government to make a public gesture toward requesting the Chinese presence.

A Syrian regime source confirmed knowledge of the Chinese vessel and said no decision has been made by Assad’s regime about requesting any Chinese assistance in fighting the years-long insurgency led by Middle East rebels.

Publicly, China has maintained a detached posture toward the Syrian conflict.

Chinese Foreign Minister Wang Yi said at the U.N. Security Council last week that “the international community cannot look on without lifting a finger, but also ought not to interfere arbitrarily.”

“A political resolution for the Syrian crisis is the fundamental way out,” he added.

Junshe was speaking about the Chinese 152 Fleet, which recently finished an escort mission and in August embarked on a five-month tour to take the fleet from the Gulf of Aden to the Mediterranean Sea and the Baltic Sea.

Junshe said the fleet’s mission was planned before Russia started to act in Syria.

The Middle Eastern defense official who spoke to WND denied a report from Debka.com, a private website headquartered in Israel, claiming the Chinese aircraft carrier Liaoning-CV-16 has docked at the Syrian port of Tartus, accompanied by a guided-missile cruiser.

The Debka report prompted the chatter about China entering the Syria conflict as did the Lebanese English language website Al-Masdar Al-Arabi, which two weeks ago quoted a senior Syrian Army officer stationed in Latakia as saying “the Chinese will be arriving in the coming weeks” and will join the Russian military there.

“We know how difficult it is to carry out this kind of anti-terrorist operation,” Putin said. “Of course, it is early to draw conclusions. But what has been done so far deserves a highly positive assessment.”

The intelligence coordination could jeopardize U.S. security, because the U.S. maintains its own intelligence-sharing channels with Iraq.

The Russian strikes were backed up by a massive Syrian ground campaign, Gen. Ali Abdullah Ayoub, chief of the General Staff of the Army and Armed Forces, told Syria’s SANA state-run media agency.

The agency further reported that following the Russian missile salvo “hundreds of of terrorists were confirmed dead, and tens of armored vehicles, two Grad rocket launchers and a huge ammunition depot were destroyed as a result of the airstrikes.”