You are here: Home / Europe / Medical response to Islamic terrorism: French doctors outline response to attacks in Paris and Nice

Following the terrorist attacks in Paris and Nice, French experts outline the country’s medical response to terrorism in a report, like reported by sciencedaily.com 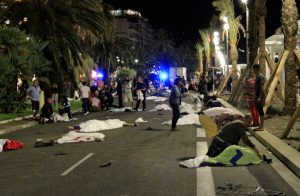 By drawing on expertise from the military, equipping emergency responders, and improving victim identification processes, the authors state that the medical response in these instances not only involves saving lives, but can also help mobilise the country against the terrorists’ main objectives of aggression, fear, and panic.

The most recent terrorist attacks in France occurred in November 2015 in Paris, and in July 2016 in Nice.

Paris was the scene of multiple mass casualty attacks at the Bataclan and in the city streets, as well as a partially failed attack at the Stade de France. The events were the most violent and devastating to occur in France since World War 2, causing 137 deaths and injuring 413 people. In Nice, a truck was deliberately driven into a crowd of people celebrating Bastille Day, causing 87 deaths and injuring 458 people.

Given that terror weapons are often war weapons, the French emergency medical services sought the expertise of military doctors. Military doctors have taught civilian surgeons, anaesthesiologists, and emergency responders about treating victims targeted with war weapons at the scene of the incident and in hospitals.

The two services also reviewed the equipment and treatments needed to handle terrorist attacks. Given that blood loss remains a major problem in attacks using guns, tourniquet, dressings that prevent blood loss, and tranexamic acid (a medication that treats or prevents blood loss) have been made available in all ambulances of the SAMU (Service d’Aide Médicale d’Urgence; the French ambulance service), and in fire brigade trucks to treat victims of trauma.

Following the Paris attack, the close cooperation between emergency response teams, including police, fire brigade, SAMU, and hospitals, may have contributed to the low number of deaths of those admitted to hospital. Building on this, the police and SAMU services have developed a method to support medical staff entering scenes where terrorist attacks have occurred to provide immediate care, allowing them to treat victims while in a dangerous area, as well as helping to move victims to safe areas.

The Viewpoint also notes some shortfalls in the response to the terrorist attacks, which include delays in identifying victims. The authors note: “Identification of the victims was clearly a deficiency during the Paris and Nice attacks, particularly those left dead on scene. There is immense pressure to provide timely answers to the families looking for their relatives and high quality evidence for judicial authorities… The concerns expressed by the families regarding the identification process, and lessons learned from all actors involved, have led to the elaboration of new Standard Operating Procedures with strict respect of international Interpol Disaster Victim Identification standards.”

Bearing in mind this pressure, the medical services have developed new procedures to accurately and quickly identify victims by using fingerprints, DNA and dental data, combined with external examination, such as finding identification documents on victims and describing their clothing. Accelerating the identification process by removing the need for an autopsy before names can be released would mean that a list of dead and injured victims could be issued daily to provide updates to families as soon as possible.

The authors also focus on the need to respond to the continuous flow of patients needing psychological care following terrorist events, including victims, relatives, doctors and others involved in the attacks and in the care of victims.

One in three people who are either victims of attacks, relatives of victims, or first responders are likely to develop post-traumatic stress disorder (PTSD), and one in three people with PTSD typically do not recover after 10 years. This illustrates the psychological burden of these incidents and the need to mobilise a large number of psychiatrists and psychologists in the aftermath of terrorist attacks to mitigate the impact on people’s quality of life.

The authors note the need to be prepared for future attacks and the changing face of terrorism.

“Emergency services must also be prepared to face very different scenarios, including attacks with chemical weapons… and attacks targeted at iconic victims such as children or emergency care responders. There is no reason to think that terrorism will become less violent. However, the recent attacks suggest that simple means (such as high-velocity weapons and trucks) can result in a very high number of victims. Protecting hospitals against an attack is also a new challenge for health-care authorities. Health-care facilities are no longer sanctuaries but soft targets for terrorists. Professionals must be responsible for their own security; in view of this, timely updated regulations emphasising protection of hospitals have been introduced in France.” explain the authors.

In conclusion, they note: “An appropriate medical response does not only save lives but can improve the resilience of the population. It breaks the vicious circle between attacks and repression, provides a positive message of hope and strength, and mobilises the whole country. The medical response is an essential component of the response to terrorist attacks and is in fundamental opposition to terrorism’s main objectives of aggression, fear, and panic.”