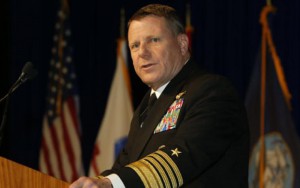 A recruiting push by Islamic State militants via thousands of Twitter accounts and other social media postings remains one of the biggest threats facing the United States, a high-level U.S. military official said.

Admiral Bill Gortney, commander of U.S. Northern Command and the North American Aerospace Defense Command, said he was particularly concerned about radicalized youth in the United States who were “in receive mode” but not communicating back.

U.S. authorities could potentially track recruits who communicate with Islamic State recruiters, but it was tougher to identify potential recruits, such as the shooter who killed five servicemen in Tennessee in July, Gortney told an event hosted by the Atlantic Council think-tank.

Gortney said heightened security at military bases around the United States – now at the highest level in nearly four years – would likely remain in effect for “quite some time,” given the government’s inability to predict when or where such attacks could occur.

“It’s going to be a long slog,” Gortney said, adding that the United States need to counter Islamic State’s narrative. “It’s a war of words. … We have to go after and break this pattern of radicalization.”

Gortney said the U.S. government was doing a comprehensive review of its efforts to counter Islamic State’s recruitment drive, but the fight needed to be led at the local level by parents, communities and schools, not the military.

Gortney ordered increased security in May, affecting everything from recruiting stations to National Guard posts and military bases and camps in the continental United States, Alaska and U.S. territory in the Caribbean.

The move came after two men opened fire outside an exhibit of caricatures of the Prophet Mohammad in Garland, Texas; they were shot dead by police. The two were later found to have had contact with militants, including a British man linked to Syria-based Islamic State rebels.

Investigators believe the Garland attackers and the Tennessee shooter principally radicalized themselves through Internet contacts, and were not directly ordered or encouraged to carry out the attack by Islamic State leaders.

Gortney said his staff was working with the intelligence community to understand when the threat level could be lowered, but warned it would be a “glacial” process.