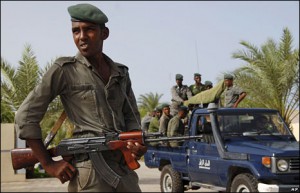 A senior Al-Qaeda leader accused of planning attacks on the United States, Europe and Australia has been jailed for 20 years in Mauritania for “terrorist activities,” a judicial source said Tuesday.

Younis al-Mauritani was arrested in southwestern Pakistani city of Quetta in 2011 along with two other high-ranking jihadis in a joint operation by U.S. and Pakistani spy agencies.

He was jailed Monday in a closed hearing in the Mauritanian capital Nouakchott, a judicial source who requested anonymity told AFP.

Pakistan’s army said Mauritani was instructed by bin Laden to focus on economic targets in the United States, Europe and Australia.

“He was planning to target United States economic interests including gas/oil pipelines, power generating dams and strike ships/oil tankers through explosive-laden speed boats in international waters,” the army said after his arrest.

Western intelligence officials from two separate countries confirmed Mauritani was part of Al-Qaeda’s top team and linked to threats against Europe, and he was extradited to Mauritania in May 2013.

Mauritanian authorities had issued an international warrant for his arrest, accusing him of participating in a deadly 2005 attack on an army barracks and a shootout with police in Nouakchott in 2008.

Kidnappings and attacks by Al-Qaeda in the Islamic Maghreb (AQIM) were frequent when Mauritania’s President Mohamed Ould Abdel Aziz came to power in 2008.

But he boasts that he has turned his nation into a regional haven of peace thanks to his reorganization of the military and security forces.

The mainly Muslim republic, sandwiched between the west coast of Africa and the Sahara desert, is seen by Western leaders as a bulwark against Al-Qaeda-linked groups.

In 2010 and 2011, Mauritanian troops carried out successful “preventative” raids on AQIM bases in neighboring Mali, before the armed fundamentalists could carry out planned attacks on Mauritania.