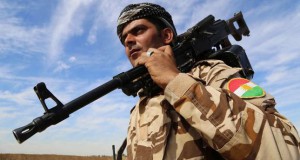 The Kurdistan Regional Government (KRG) Ministry of Peshmerga has announced an operation has begun to the south of Daquq to liberate the area from Islamic State (IS).

In a statement on Wednesday August 26th, the Peshmerga Ministry revealed that international coalition jets bombed IS positions in several villages around Daquq.

“The airstrikes supported the Peshmerga, who drove the jihadists back from the area and recaptured IS-held villages in southern Kirkuk,” reads the statement.

Senior Peshmerga Commander, Sheikh Jaafar Mustafa said that strategic positions such as Abu-Najm village are on the main road heading to Kirkuk.

“Insurgents could have threatened Kirkuk at any time when they were in control of the area,” Mustafa added.