You are here: Home / Africa / Mass grave shown to public in Burundi for the first time 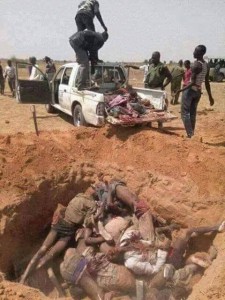 Officials in the Burundian Capital, Bujumbura, on Monday showed a mass grave to the public for the first time, confirming reports that dozens of people had been buried in such graves since political violence erupted last year in the East African country.

The remains of three people were dug up from the grave in Mutakura neighbourhood, an opposition stronghold in the presence of the media.

About 30 people are believed to have been buried there, Bujumbura Mayor, Freddy Mbonimpa, said.

The grave was believed to date from April or May of 2015, when protests erupted against the announcement by President Pierre Nkurunziza that he would seek a third term in office.

Defying the constitutional two-term limit, Nkurunziza won an election boycotted by the opposition in July.

More than 400 people have been reported killed in protests, attacks by police and the armed opposition, according to the UN.

The previous death tolls however do not include whatever people may be found in mass graves.

The government had until now denied the existence of such graves, which had been documented by human rights groups, based on witness accounts and satellite pictures.

Police have been accused of burying government opponents in mass graves. But police representatives said the people buried in Mutakura had been killed by the opposition.