You are here: Home / MidEastGulf / Mass grave of Christians, executed and buried in a school, exists in West Mosul 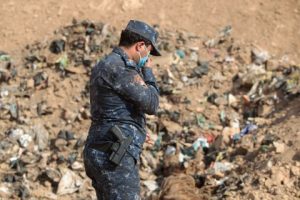 A mass grave containing Christian civilians exists in West Mosul which is yet under the Islamic State (IS) control, and the fate of 100 Christians from Mosul remains unknown.

Ma’an Shlimon, the director of the Christian affairs in Duhok province told BasNews that 13 Christians, including 10 women, have so far been freed from the grip of IS, according to basnews.com.

Shlomo Organization for documenting the crimes committed against Christians in Iraq said the IS militants abducted 150 Christians from Batnaya, Qaraqosh and Tal Kef areas whose fate is still unclear.

A number of Christians have been executed in Baghdad School on the right coast of Mosul who have been buried in a mass grave inside the school, “but we have no knowledge of the number of victims in the grave,” Barbar said.

“We are waiting for the liberation of the right coast of the city to document the grave,” he said.

The official added that around 4,000 Christians from Nineveh Plains were displaced to Duhok after the extremist organization took over Mosul back in 2014.