You are here: Home / MidEastGulf / Mass execution of Iraqi prisoner by Daesh, other send to Syria 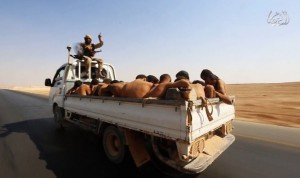 The Iraqi prisoners who are under ISIL captivity have been transferred from the city of Mosul in Iraq’s Nineveh province to Raqqa and Deir Ezzur in Syria while scores of others have been executed by the Takfiri terrorist group, an Iraqi security agent told FNA on Wednesday.

“The ISIL ( So-called Islamic State, ISIS and Daesh) has executed a large number of its prisoners in Mosul city and taken some others to unknown destinations in Raqqa and Deir ez-zur provinces,” sources disclosed.

The executed Iraqi prisoners have been thrown into a well in the Eastern part of Mosul, known as al-Houta, he said.

The ISIL move came as the Iraqi army is preparing for military operations to win back full control of Mosul city.

In a relevant development on Monday, the ISIL terrorists executed scores of residents of the city of Mosul in Nineveh province on treason charges.

A sum of 35 of Mosul residents were shot dead by the ISIL for alleged spying and treason in al-Qazlani military base in the Western part of Mosul on Sunday, the Arabic-language al-Sumeria news website quoted an unnamed Iraqi security source as saying on Monday.

Earlier today, Head of Iraqi Awakening Councils Wissam al-Hardan disclosed that the ISIL has killed a large number of Fallujah citizens for the fear of their imminent uprising as the country’s army and volunteer forces are preparing for large-scale military operations to win back the city in Anbar province.

“The ISIL executed many Fallujah residents who are fed up with the Takfiri terrorist group over the past two weeks,” al-Hardan told FNA.

He underlined that the psychological pressures exerted on the tribes and citizens in Fallujah is to such an extent that they prefer to die rather than stay under the ISIL’s yoke.

Al-Hardan reiterated that the people of Fallujah have carried out several retaliatory measures against the ISIL.