You are here: Home / Mediterranean / Marine gunships enter the fight against the Islamic State in Libya 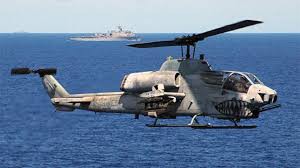 After nearly a month of airstrikes against the Islamic State fighters dug in around the Libyan city of Sirte, U.S. helicopter gunships have been dispatched to help root out the extremist group from some of the denser parts of the city.

A U.S. defense official, speaking on the condition of anonymity to discuss ongoing operations, said Marine AH-1W SuperCobra helicopters participated in strikes against the Islamic State over the weekend. According to a U.S. Africa Command release, U.S. forces conducted nine strikes from Friday to Sunday, targeting Islamic State fighting positions and vehicles.

The Islamic State fighters have retreated “to the densest, most built-up part of the city,” the official said. “[The AH-1] is a platform that lends itself well to that kind of mission.”

Helicopter gunships are usually best directed to their targets when they receive directions from combat air controllers on the ground, known as JTACs. While the United States has a small detachment of Special Operations forces in Sirte, most of the targeting information for the airstrikes there is being relayed to U.S. forces through Libyan government troops.

Outfitted with a 20mm cannon, rockets and missiles, the AH-1W SuperCobra is one of the newer variants of a helicopter that first saw combat in the later years of the Vietnam War. Currently, the United States Marine Corps operates the AH-1W SuperCobra and AH-1Z Viper as its premier gunships when it comes to supporting Marines on the ground. The Cobra and Viper often fly in what is called a mixed section, meaning the gunship usually flies along with UH-1 Huey, a transport helicopter outfitted with sensors and armed with heavy machine guns and rockets.

Until recently, the airstrikes in Sirte have been carried out by fixed-wing aircraft, such as the AV-8B Harrier ground attack jets. Helicopter gunships, such as the Cobra, fly low and slow and are able to attack targets more directly and systematically than, say, a jet that releases a bomb while screeching overhead at hundreds of miles an hour. Yet gunships, flying at low altitude and low speed, are more at risk of getting shot down by ground fire and shoulder-fired surface-to-air missiles, or MANPADS. The man-portable launchers have been widely proliferated throughout Libya and the region after large stocks of the devices were looted from government stores after the collapse of Moammar Gaddafi’s regime in 2011.

Since Aug. 1, the United States has been striking targets in Sirte primarily from the USS Wasp, an aging amphibious assault ship stationed off the Libyan coast. About 200 feet shorter than a full-fledged Nimitz-class nuclear aircraft carrier, the Wasp can support a complement aircraft, including Harriers, MV-22 Ospreys, Cobra gunships and Huey transport helicopters.

The Harriers, Cobras and Hueys belong to Marine Medium Tiltrotor Squadron 264, the aviation component of the 22nd Marine Expeditionary Unit, or MEU. The MEU has been almost entirely responsible for the strikes against the Islamic State in Sirte, though the aircraft flying from the Wasp is only one component of the unit. The 22 MEU has a ground component, known as a Battalion Landing Team, as well as a logistics detachment called a Combat Logistics Battalion. Combined, the three elements make a self-sustaining strike force than can be shuttled around the globe in a relatively short amount of time.