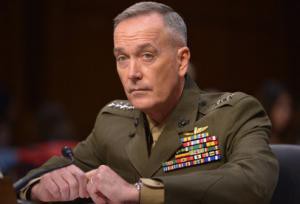 Dunford, 59, replaces General Martin Dempsey as chairman of the Joint Chiefs of Staff.

Though the position has no direct operational authority, he acts as the main military advisor to the president and the defense secretary, and holds massive sway on matters of war and peace.

Dunford, who earned the nickname “Fighting Joe” as an infantry officer during the US-led invasion of Iraq in 2003, ascends to the top of the military food chain during a difficult time.

Recent years have seen a resurgent Russia annex Crimea and aid separatists in eastern Ukraine, as well as the swift rise of the Islamic State group in Iraq and Syria that took the world by surprise.

In addition, the military is facing cuts if the Republicans and the White House can’t agree on the budget.

Observers say Obama picked Dunford in part because of his ability to give candid and impartial advice.

“He knows how to tell you your baby’s ugly without making you upset.”

Dunford was sworn in during Dempsey’s colorful retirement ceremony in Virginia on Friday, which Obama attended and which saw the outgoing general sing an Irish folk song.

Dempsey, 63, served nearly four years in the top general’s spot, but drew criticism from opponents who said he should have advocated a stronger stance against ISIS jihadists.

Drawing on the experience of the US-led war in Iraq, which lasted almost a decade, he was against sending troops back to the Middle East to tackle IS, and instead wanted local Iraqi forces to do more fighting.

He won praise in the Obama administration but it was a policy critics said emboldened America’s enemies.

Republican Senator John McCain, who heads the Senate Armed Services Committee, said in a televised interview that Dempsey was the “most disappointing” chairman he’d seen.

“He has supported the plan to completely withdraw from Afghanistan. He’s basically been the echo chamber for the president. … His lack of either knowledge or candor about the situation in the Middle East … has done great damage,” McCain said.

Dunford previously served as the commander of NATO’s International Security Assistance Force in Afghanistan from February 2013 until August 2014.

During his time as commander in Kabul, Dunford oversaw the major drawdown of tens of thousands of US troops, as Afghan forces took the lead in the fight against the Taliban insurgency.

But Dunford persuaded the White House to keep a small force on the ground after 2014 instead of a total troop withdrawal.

Dunford also led troops in the 2003 invasion of Iraq and spent nearly two years in the country.

“In the early years of the Iraq War… Joe refused armor inserts in his flack-jacket until every Marine under his command was already issued a pair.”

Carter also paid tribute to Dempsey, saying he did much “to make sure tomorrow’s forces as superb as today’s, to drive forward in new domains like cyber, space, and to manage as well as possible through unconscionable budget turbulence.”

In 2009, Dunford was appointed head of Marine forces in the military’s Central Command, which oversees American troops across the Middle East.

An infantry officer, Dunford followed General James Amos, a pilot, as commandant of the Marine Corps.