You are here: Home / MidEastGulf / Mapping Hezbollah’s Syria war since 2011 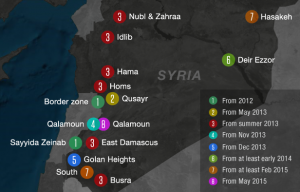 Two years ago this week, following a large car bomb that killed 27 civilians in the largely pro-Hezbollah southern suburbs of Beirut, the Party of God’s Secretary-General, Hassan Nasrallah, gave a speech unequivocally settling the questions swirling around Lebanon as to whether he would rethink the military intervention in Syria he had announced three months previously.

“If we had 5,000 fighters in Syria [before the bomb], they’ll become 10,000,” Nasrallah told supporters via video feed. Moreover, “if the battle requires […] that I and all of Hezbollah go to Syria, then we will go to Syria,” he added to prolonged cheers.

Today, the car bombs in Beirut have stopped, but Hezbollah’s deployment in Syria has ballooned from what began as a small expeditionary force in rural villages near the Lebanese border to what Nasrallah recently described as a presence spanning the four corners of the country, from “Damascus and Aleppo and Deir Ezzor and Qusayr [to] Hasakeh and Idlib.”

“We will be present in all the places in Syria that this battle requires,” he declared.

Below, and in the map above, NOW tracks how the militia that once insisted its arms were reserved for use only against Israel has transformed into what critics describe, in the words of the late Saudi foreign minister, as a hostile “occupier” of Arab lands.

Hezbollah’s earliest military involvement in the Syrian war began in 2011, at which time it was “limited in size and scope primarily to advisory and support roles,” according to an April 2014 report [pdf] issued by the Institute for the Study of War (ISW). Unsubstantiated reports, based on Syrian opposition claims, of Hezbollah fighters being killed in combat were published as early as September 2011.

It was in 2012 that more solid evidence emerged of the Party’s presence, both in rural villages northeast of the Lebanese border and around the Shiite Sayyida Zeinab shrine in Damascus, where fighters were first deployed in “early 2012,” according to ISW. The Independent’s Robert Fisk later met Hezbollah’s head of security at the shrine, who told him he had been there since April 2012. In October 2012, NOW interviewed a Lebanese Free Syrian Army volunteer who claimed to have fought Hezbollah units near Qusayr in May of that year.

Starting summer 2012, reports of burials of slain Hezbollah fighters became commonplace. When a senior commander, Ali Hussein Nassif, was publicly buried in the Beqaa Valley in October 2012, Nasrallah was forced to admit in a speech that some Hezbollah members were battling in Syria, though he asserted they were there of their own accord, rather than on official orders.

Starting April 2013, Nasrallah began gradually conceding what was by then the open secret of Hezbollah’s intervention, pledging in a 30 April speech that the Party “will do everything in our power to help” its allies in and around Qusayr, where rebels had driven out regime troops. The following month, Hezbollah launched its largest-yet operation, assailing Qusayr with over 1,000 men under the cover of the Syrian air force, eventually capturing the town in early June.

“The Qusayr offensive was a departure from Hezbollah’s previous involvement in Syria,” said the ISW report. “Not only did Hezbollah operate in much larger, more concentrated numbers than ever before, but the group also controlled the planning and conduct of the operation.”

It was also by far the most costly step the Party had yet taken in Syria, with over 200 fighters buried between late May and early June, according to the ISW. As of September 2013, Hezbollah was governing Qusayr “independently,” the Wall Street Journal reported, with its own “operations base in the town’s northern section that is off-limits to most Syrian civilians.”

Following the Qusayr victory, Hezbollah expanded its geographical presence dramatically, deploying forces across a 500km stretch of territory from the Shiite villages of Nubl and Zahraa, north of Aleppo, to the partially-Shiite town of Busra, southeast of Daraa.

For the most part, these deployments – which also included east Damascus, and the outskirts of Idlib and Hama – were significantly lighter than in Qusayr, being aimed merely at bolstering and supporting regime forces and their allies, such as the National Defense Forces. The Party did, however, play a decisive role in the battle for the city of Homs, from which rebels were expelled in July.

Not all of these deployments proved successful. In March of this year, for instance, the Southern Front rebel coalition captured Busra in its entirety. And while Hezbollah continues to hold on to Nubl and Zahraa, as well as the majority-Shiite towns of Kefraya and Al-Fu`a in Idlib Province, they do so under tight rebel sieges, with the latter two towns coming under heavy fire in recent weeks in retaliation for Hezbollah’s invasion of Zabadani, west of Damascus (see Phase Eight).

In November 2013, Hezbollah launched its most serious assault since Qusayr, this time on rebel positions in the hardscrabble Qalamoun mountain range on the eastern edge of the Lebanese border. It was to Qalamoun that thousands of rebels had fled after Qusayr, and from the territory they threatened not only the approach to Damascus but also Lebanon’s Bekaa Valley, where they frequently launched rockets at Shiite villages.

As in Qusayr, Hezbollah took the lead in Qalamoun, working in tandem with the regime air force. By a combination of besiegement, massive aerial bombardment, and eventual ground invasion, the Party slowly but surely captured the key towns of Qara, Nabk, Rankous, and finally Yabrud, which brought the offensive to a halt in March 2014.

In taking the towns, however, Hezbollah had only displaced the rebels (as well as ISIS and Jabhat al-Nusra jihadists) to the barren valleys around and in between them. Fourteen months after the conquest of Yabrud, the Party would launch a second phase of fighting in Qalamoun aimed at clearing militants from the mountain range entirely (see Phase Eight).

Among the more opaque aspects of Hezbollah’s intervention has been its activity in the Golan Heights, where, as well as battling rebels, it has engaged in tit-for-tat fighting with its older enemy, the Israeli army, since at least December 2013.

In March 2015, a Hezbollah fighter told reporter Nicholas Blanford the Party aimed to establish “a new front line” against Israel in the Golan, building tunnels and bunkers akin to those present in southern Lebanon. Israeli military analysts have written to the same effect, which partly explains the series of Israeli air strikes on Golan targets since early in the Syrian war. In January 2015, an Israeli strike killed Jihad Mughniyeh, son of the late senior Hezbollah operative, Imad Mughniyeh, along with an Iranian Revolutionary Guards general and other Hezbollah militants.

This murky warfare continues to this day: the most recent Israeli strike on the Golan was just two weeks ago.

Since at least September 2014, Hezbollah has reportedly had a light presence in regime-held parts of the eastern city of Deir Ezzor, which is otherwise surrounded by ISIS. The presence of a reporter from the Party’s Al-Manar TV station in the city in February 2014 suggests their deployment may have begun in early 2014, or even late 2013. In May 2015, the regime was said to be preparing to evacuate Deir Ezzor after ISIS’s conquest of Palmyra.

In February 2015, in what was initially billed as a major new campaign, involving over 4,500 fighters, Hezbollah spearheaded a push into a rebel-held triangle of territory in southern Syria between Damascus, Daraa, and Quneitra. The campaign was named “Operation Martyrs of Quneitra,” in reference to the Israeli air strike in January that killed several Hezbollah members as well as an Iranian Revolutionary Guards general (see Phase Five).

To date, the operation appears to have had little success, with rebels largely holding territory and even advancing in, for example, Busra (see Phase Three).

Elsewhere, Hezbollah has reportedly been training pro-regime militants in the northeastern city of Hasakeh since at least February 2015.

When the snow on the Qalamoun heights melted in spring 2015, Hezbollah commenced its long-anticipated second round of battle in the mountain range (see Phase Four). Progress was swift at first, with territory in and around the central Tfeil promontory falling with little resistance.

Much more challenging for the Party has been the fight for Zabadani, an opposition stronghold at Qalamoun’s southern end, where an estimated 1,500-2,000 rebels have fought fiercely since early July. A pro-Hezbollah website that publicizes funerals of Party fighters has recorded 130 since the start of the second Qalamoun offensive.

On Wednesday, a 48-hour ceasefire had reportedly been reached, whereby Hezbollah and its regime allies would halt their attacks on Zabadani in exchange for rebels ceasing their own on the Shiite villages of Kefraya and Al-Fu`a in Idlib Province (see Phase Three). According to the pro-regime broadcaster Al-Mayadeen, the ceasefire was brokered by Iran and Turkey, backers of Hezbollah and the rebels, respectively.