You are here: Home / Europe / Map of TERROR: Brit winter holidays to Spain and France cancelled over ISIS Europe threat 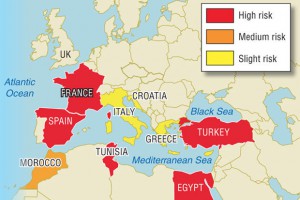 In many popular holiday hotspots the terror warnings have been ramped up to such extent that Europe is now a sea of red no-go areas.

New Foreign and Commonwealth Office advice reveals that Egypt, Turkey and Tunisia are on a “red list” where extremist nutcases are said to be plotting mass casualty attacks.

The terrible news for Brits comes as 20,000 holidaymakers were left stranded in Egypt following fears a Russian passenger jet was bombed by ISIS in Egypt.

All 224 died on board leading to airline companies cancelling flights out of Egypt’s popular Sharm el-Sheikh airport.

The busiest days to fly surround Christmas and New Year’s Eve as Brits anxious to escape the doom and gloom of the UK head for warmer climates.

But now even holiday favourite Spain – which sees 12 million Brits visiting each year to sunny destinations such as Ibiza, Majorca, Barcelona and the Costa Del Sol – is also on the red list, meaning there is a high risk of terror attacks.

The Foreign Office has stated there is a “high threat from terrorism” in Spain.

“There is considered to be a heightened threat of terrorist attack globally against UK interests and British nationals, from groups or individuals motivated by the conflict in Iraq and Syria. You should be vigilant at this time,” they said.

Even France – which is just separated from Britain by just over 20 miles – is at high risk.

Morocco is at medium risk and there is even a general threat of terrorism for people travelling to Cyprus, Greece, Croatia and Italy.

This will no doubt throw many Brits winter holiday plans out the window as they stay firmly put in the UK.

A family of 14 recently told of their disappointment after their dream holiday to Sharm el-Shiekh was cancelled after EasyJet suspended all flights.
And around 120,000 people were due to arrive at the Red Sea resort every week until Christmas.

But now Foreign Secretary Philip Hammond has admitted it could be “days, weeks or months” before airlines can resume regular services.

Tunisia was made a high risk zone following the slaughter of 37 tourists on a beach at the hands of Islamic State.

“On balance, we do not believe the measures in placeprovide adequate protection for British tourists in Tunisia at the present time,” the Foreign Office states.