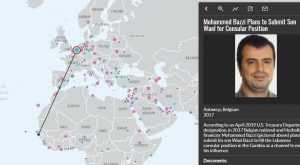 A ground-breaking interactive map detailing the breadth of Hezbollah’s global operations over the past 38 years been launched by US think-tank the Washington Institute.

The online tool, which features freshly-unclassified documents from the US intelligence services, gives incisive information on more than 12 years of research on the activities of the militant group, which is overtly active in Lebanon but has engaged in covert criminal endeavours all over the world.

Almost 1,000 “events” involving Hezbollah, from Vancouver to Frankfurt to Manila, going back to 1982 are recorded on the map, with 300 more due to be added in the coming weeks.

These include terrorist attacks and plots as well as counter-terrorism actions, but also scores of incidents when some countries unwittingly played host to weapons trafficking, recruitment and money-laundering carried out on behalf of the group.

Hezbollah has been designated a terrorist organization by the US since 1997 and in January this year, the United Kingdom has also recognized it as a terrorist group in its totality.

But for other countries, including those in the European Union which still distinguish between an “armed wing” and a “political wing” of Hezbollah, the contents of the map might lead to some soul-searching.

Speaking at a videoconference to mark the map’s launch on Monday, August 3, Juan Zarate, a former deputy national security advisor for combating terrorism during the George W. Bush administration, said: “This begins to pierce some of the mythology or orthodoxy we hear in parts of the world about what Hezbollah is or is not. The map clearly reflects that Hezbollah is a global organization, not just an organization based in Lebanon or the Levant.”

Information about Hezbollah’s malign activities typically surfaces in fragments: a news bulletin here, a court case there – and often hampered by the fact that foreign governments need to obscure the full extent of what they know for security purposes.

For the first time, this user-friendly map draws everything so far known about Hezbollah’s malign activities into a single, multimedia repository. It was the brainchild of Mary Horan, the Washington Institute’s late director of publications, who sadly died last year before its completion.

Each one of the digital entries includes a description of the Hezbollah-linked “event” and displays its connection, where known, to other international incidents.

These are backed up by hundreds of readable documents such as government reports, court documents, congressional testimony and research reports – among them intelligence reports going up to the mid-1990s that have been declassified by the CIA for the first time.

Matthew Levitt, the project lead and director of the Institute’s Reinhard Program on Counterterrorism and Intelligence, previously spent nine years compiling a book on Hezbollah’s global footprint. He told IranWire: “The main myth about Hezbollah is that it is only what it claims to be publicly and doesn’t do anything illicit, illegal or violent.

“There are people that believe that message simply because Hezbollah is very good at hiding what it’s doing. It’s very important to have a conversation about the organization it its totality – not just its charitable work, but also its terrorist activity.”

The map can help users to identify trends in Hezbollah’s tactics and levels of influence over the years. For instance, Mr Levitt says, “They used to be engaged mainly in hijacking. Now, they are more interested in ammonium nitrate bombs and explosives.

“Also they have changed in their ability to create a standing army. They are now more of a regional military actor, often acting on issues that have nothing to do with them or with destroying Israel; for example, supporting militants in Bahrain and Yemen.”

It also highlights hundreds of discreet and arguably under-reported incidents in Hezbollah’s international activities down the decades.

For instance, in 2001, 17 individuals in Spain’s Canary Islands were arrested on suspicion of arms trafficking and illegal financing of Hezbollah through a $10.6million-per-year time-share fraud targeting British, Irish and German holidaymakers.

Four years later in Ecuador, South America, authorities broke up a drug trafficking ring operating out of El Turco restaurant in the city of Quito. The group was smuggling cocaine shipments worth $1million each around the world and was giving 70 per cent of its profits to Hezbollah in Lebanon.

Foiled plots also feature heavily in the Washington Institute’s records. For instance, in 2014, two dual-national Hezbollah members were arrested with bomb-making materials in their possession in Bangkok, Thailand for planning an attack against Israeli travelers during the Passover holiday. Authorities also prevented a terror attack in Kuwait in 2015 in which a massive stockpile of arms smuggled from Iraq was found.

Users can track all of these incidents and hundreds more on the map, find out which countries were affected or implicated, and explore first-hand documentary evidence of crimes linked to Hezbollah: including indictments, court papers, property deeds, flight paths and even copies of the perpetrators’ passports.

Naturally the most Hezbollah-linked activity, reflected on the map, has concentrated in Lebanon, Syria, Israel and to a lesser extent Iran and the Gulf. But much of the group’s illicit fundraising and logistics operations have taken place in mainland Europe, particularly Germany and Belgium, with many countries unwittingly complicit in massive global money-laundering operations.

The interactive map is a living project and researchers at the Washington Institute will be adding hundreds more entries to the database over time, as documents become de-classified and fresh incidents come to light.

People with information or documentary they believe ought to be included in the project are encouraged to get in touch. The team will conduct thorough due diligence on any new submissions. The project co-ordinators can be contacted via a dedicated email address,  hezbollahmap@washingtoninstitute.org