You are here: Home / MidEastGulf / Map: ISIS has lost 9.4 percent of its territory this year 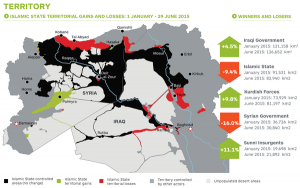 ISIS has lost almost 10 percent of its territory so far in 2015, yet another indication that the group, for all the terror it has sown in Syria and Iraq, is losing the war.

Defense analysis group IHS Jane’s 360 detailed the territorial loss in a report, which includes this map below estimating the change in ISIS’s territory between January 1 and June 29 of this year. Green shows territory ISIS has taken in those months, and red shows land that it’s lost.

Jane’s estimates the total loss at 9.4 percent of what ISIS held when the year began.

The year has included gain for ISIS, as well, most notably the Syrian city Palmyra and the Iraqi city Ramadi. But according to Jane’s analyst Columb Strack, “Successes in Palmyra and Ramadi came at the expense of significant territorial losses elsewhere.”

This points to one of ISIS’s most fundamental problems: It has too many enemies. You can see this in another thing on the Jane’s map, showing who gained territory: the Iraqi government, Syrian rebels (labeled “Sunni insurgents”), and Kurdish forces in both Iraq and Syria. All of those groups are hostile to ISIS, and two of them are backed by US airpower. ISIS’s fighters might be skilled, but they can’t fight everyone at once.

Losing territory is a serious problem for ISIS. The whole idea of ISIS, the thing that makes it really different from al-Qaeda, is that it claims to be the actual state: a caliphate that governs and holds territory. It needs that territory to ideologically justify itself, to collect the extortionary “taxes” it uses to fund its activities, and to attract ever more foreign recruits.

“When they declared the caliphate, their legitimacy came to rest on the continuing viability of their state,” Daveed Gartenstein-Ross, a senior fellow at the Foundation for the Defense of Democracies, told me in October. If they keep losing territory, their funding and recruiting pool will slowly dry up.

None of this means ISIS is going to fall quickly. But it does show that the widely feared terrorist group, for all the terrible suffering it has inflicted, is on the battlefield not as fearsome as it sometimes is perceived to be.