You are here: Home / Africa / Many Nigerian towns still under Boko Haram control 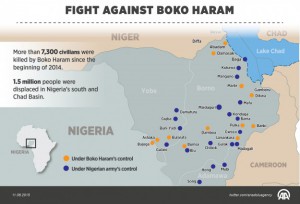 Until early 2014, Nigeria’s Boko Haram was notorious only for deadly hit-and-run attacks, suicide bombings and planting explosives in crowded areas to achieve maximum civilian casualties, mostly in the northeastern region.

But the militants upped their game in the first quarter of 2014, capturing whole villages, towns and districts.

By the end of the year, over 20 local government areas scattered across the northeastern Adamawa, Borno and Yobe states had come under the militants’ control.

Combined, the annexed areas annexed are estimated to be the size of Belgium.

Boko Haram chief Abubakar Shekau renamed some of the towns as a mark of his group’s control.

But the Nigerian army, supported by troops from Chad and Niger, rolled back much of Boko Haram’s territorial gains in a special operation launched in mid-February 2015 as part of an effort to guarantee security for the general elections rescheduled for March.

However, a number of towns, local governments and large swathes of strategic land remain under militant control.

Alongside a smattering of towns, Boko Haram is believed to occupy a large stretch of the Mandara Mountains along the Nigeria-Cameroon border, where new recruits are reportedly being trained on how to use weapons.

The militants are also occupying several corridors such as Darazo and Alagarno forests, which span Borno, Bauchi and Gombe, with occasional skirmishes with troops in the region earlier this year.

While troops carried out what the army called “successful raids” on Alagarno in April this year, Anadolu Agency understands that Boko Haram fighters have returned to the area.

Boko Haram also still operates several camps in the Sambisa forest, one of their strongholds, and has waged deadly attacks around Askira Uba, one of the three local government areas surrounding the forest.

Nigeria is fighting a six-year Boko Haram insurgency that has claimed tens of thousands of lives and displaced over one million people from the country’s northeastern region.

In mid-2014, the group declared a self-styled “Islamic caliphate” in areas seized in Nigeria’s northeastern Adamawa, Borno and Yobe states.

Since January, Cameroonian, Chadian and Nigerien troops have joined the fight against Boko Haram.