You are here: Home / MidEastGulf / Many ISIS members have entered into Turkey (and returned to Europe) 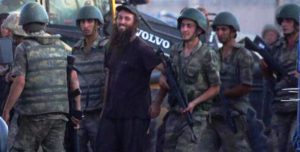 Kerestecioğlu said, “According to US based think tank Soufan Center’s report titled Foreign Fighters and the Threat of Returnees, 5.600 foreign national ISIS member terrorists in Iraq and Syria have returned to their countries.”

“THEY RETURN TO TURKEY WITHOUT A HITCH”

“There are claims that a significant portion of ISIS members from Europe, North America, Russia and Central Asia cross over into Syria through Turkey and return to their countries over Turkey again,” said Kerestecioğlu and added:

“This study cites the number of Turkish nationals who joined the ISIS terrorist organization to fight in Syria and Iraq as 1500. Those with Turkish passports are at first place among those who fight in the name of ISIS in Syria and Iraq and return to their countries. Some 900 ISIS militants have been reported to have returned to Turkey without encountering any obstacles. Recently, there have been operations against ISIS as well. As part of these operations, 32 people have been detained in Istanbul while 172 out of 245 suspects with active arrest warrants have been detained in Ankara.”

“HOW MANY ISIS MEMBERS HAVE BEEN RELEASED?”

“How many ISIS members have entered Turkey in the last year? Have you conducted any work on this?

How many people detained in ISIS operations in the last year have been arrested? How many have been released?

What precautions have been taken against ISIS members returning to Turkey? What efforts are in place for border security? What does your Ministry have in the works for this?”