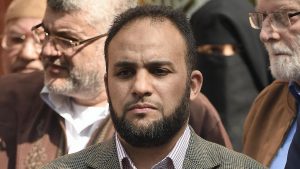 A controversial Imam, who preached at the same mosque the Manchester bomber attended, also had links with a Muslim Brotherhood member in the Libyan government and the former Grand Mufti of Libya, who has shown support for extremist groups, it has been revealed.

It was discovered last week that Mustafa Graf, an Imam at Didsbury Mosque in Manchester, had seemingly called for armed struggle in Syria and Iraq in 2016, although he denies the accusation. Salman Abedi, who blew himself up at an Ariana Grande concert in Manchester last year and killed 22 people, was a regular attendee at the mosque.

Mr Graf is believed to know Mohamed Amari Zayed, who is a member of the Muslim Brotherhood and part of the UN-backed Presidency Council of Libya, which is supposed to pave the way for a new government. The preacher appeared in photos with Mr Amari Zayed at a 2015 conference in Brussels, according to Libyan news site Al-Marsad, which obtained the images and shared them with The National.

A 2014 posting on the website of Youssef Qaradawi, the Muslim Brotherhood cleric, appears to refer to Mr Graf as a member of the International Union of Muslim Scholars, which has been designated a terrorist group by the UAE over its Brotherhood links.

One faction of the BRSC was Ansar Al Sharia, who are widely believed to have been behind the 2012 murder of US ambassador Christopher Stephens in Benghazi. Mr Ghariani has also been designated a terrorist by an array of countries including Saudi Arabia, the UAE and Egypt. He has previously condemned US airstrikes on the Libyan city of Sirte in 2016 when it was held by ISIS.

Mr Graf has often appeared on the Ghariani-owned Tanasuh TV and the Turkey-based Al-Nabaa. Through this and social media he has repeatedly attacked Dr Aref Nayed the former Libyan ambassador to the UAE and current presidential candidate. Dr Nayed is vehemently opposed to the Muslim Brotherhood and extremist groups.

Mr Ghariani is currently believed to be Tajoura, a suburb of the Libyan capital of Tripoli. A coalition of groups and Islamist fighters based in Tajoura who Mr Ghariani supports have attacked a prison at Metiga airport in Tripoli run by a powerful brigade nominally operating under the UN-backed government’s interior ministry.

The prison holds a range of people including ISIS fighters and the brother of the Manchester bomber Hashem Abedi, who stands accused of supporting terrorism.