You are here: Home / Europe / Man who drove car at French troops had jihadi propaganda in computer – prosecutor 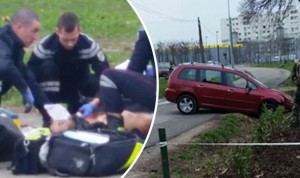 French investigators found jihadist propaganda material on Saturday in the computer of a man who drove his car into troops guarding a mosque in southern France on New Year’s Day but said it did not prove he had links with any terrorist groups.

“The inspection of his computer led to the discovery of jihadi propaganda images,” local prosecutor Alex Perrin told Reuters.

“These are downloadable images that are a few weeks old. Not the worst type of images, but rather bellicose slogans,” he said. “It shows he had an appreciation of that but it does not prove he had links with terrorist organisations.”

The 29-year old Frenchman of Tunisian descent rammed his car into a group of four soldiers in a car park outside a large mosque in a suburb of Valence on Friday afternoon, the prosecutor told reporters earlier on Saturday.

He said earlier there was no evidence of him belonging to any terrorist group and it seemed he had acted alone.

“He reportedly shouted ‘Allah is great’, which suggests some sort of religious element.”

“When he was apprehended, he mentioned the fact that he wanted to kill troops because troops killed people,” the prosecutor added. “He said he wanted to be killed by troops.”

There was also no indication that the man was suffering from mental illness, the prosecutor said. He had been unemployed for several years and was not known to police or intelligence services, the prosecutor added.

The practising Muslim lived in a suburb of Lyon, 100 km (60 miles) north of the town of Valence where the incident took place. “He had come to Valence, where his family-in-law lives, for the end of year holiday,” the prosecutor said.

He was shot in the legs and arm by the troops and was still in hospital on Saturday. A soldier and a Muslim man were also slightly injured in the incident.

French television showed an amateur video of the soldiers surrounding the red Peugeot estate car and shouting “get out” before shooting, with the vehicle ending up in a ditch.

France has been on high alert since Islamic State militants killed 130 people in Paris on Nov. 13. Soldiers are protecting sensitive places across the country, including official buildings and religious sites.

A string of similar but unrelated “lone wolf” attacks took place at the end of 2014.

French Defence Minister Jean-Yves Le Drian, speaking during a trip to Jordan, praised the troops’ restraint in the incident

“They were totally up to the task,” he said.