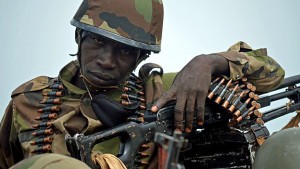 Mali’s army has killed five Islamist fighters believed to have been behind a series of attacks along the border with Burkina Faso, a spokesman said on Thursday.

Clashes erupted on Wednesday in the Tiebanda Forest, in central Mali’s Mopti region, and ended in the early evening, said Colonel Souleymane Maiga. A number of Islamist militants were also wounded, he said, while the army suffered no casualties.

“These are elements that carried out several attacks in the region, notably against security posts. The army located them a while ago thanks to witness accounts from villagers,” he said.

The West African nation is still struggling with the fallout from a 2012 Islamist occupation of its desert north. A French-led military intervention in 2013 routed the militants, but there are frequently attacks on Malian soldiers and United Nations peacekeepers.

Unknown attackers fired seven mortar shells at a U.N. base in the northern region of Kidal on Wednesday, the peacekeeping mission MINUSMA said, adding there were no casualties or damage.

Insecurity has spread south in recent months as home-grown Islamist fighters have stepped up raids, threatening a spillover of violence into Burkina Faso and Ivory Coast.

Three people were killed earlier this month when around 50 unidentified gunmen attacked Burkina Faso gendarmerie near the western border with Mali.