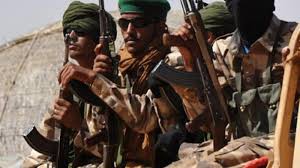 At least, two Malian soldiers were killed and four others injured in a weekend ambush in an area notorious for jihadist attacks, officials said.
The soldiers were fired on Saturday afternoon near Nampala close to the Mauritanian border, where Islamist fighters have long been active. “A Mali army escort was ambushed about 3 pm (1500 GMT),” the government said in a statement.
“Two soldiers were killed and four others injured.” Light weaponry was recovered in a follow-up search, the statement said, without saying who the attackers were. Ten Malian soldiers were killed by jihadists in an assault on their garrison base in Nampala in January in a raid claimed by Al-Qaeda in the Islamic Maghreb (AQIM).