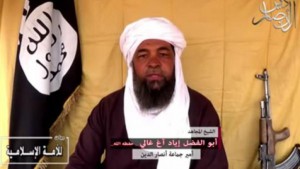 Iyad Ag Ghaly, the Malian Tuareg leader of Ansar Dine, has resurfaced with the release of an audio statement in which he threatens France and rejects any peace deal in Mali. The audio was published by al Qaeda in the Islamic Maghreb (AQIM), which has close ties to Ansar Dine, on one of its official Twitter feeds.

The statement, which has been translated by the SITE Intelligence Group, begins by saying Ansar Dine is “combating a new horn from the horns of global disbelief, after the American horn was smashed on the firm rock of jihad. This horn is a result of the French Crusader campaign that brought all its knights and horses, and its slaves and its insane ones against the Shariah of Islam in this land.” He then says that his fighters are fighting to “push away the aggression of the French Crusader assailant.”

Ghaly further claims that the French are “oppressing” the people of Mali and Azawad, the Tuareg name for northern Mali. “Under the domination of the French Crusader invasion, where sanctities are violated, holy sites defiled, fear and horror spread, and the crimes of stealing and looting prevail. It is contrary to what France claimed and continues to claim, and before it, its sister in evil America, in claiming security and stability, and development and construction.” Ghaly then mentions the Charlie Hebdo attacks in Paris earlier this year, saying, “The case of Charlie Hebdo and its satirical cartoons offensive to the Prophet, Allah’s peace and blessings be upon him, is but a part of that [hatred of Muslims].”

As a result of the “domination” of Muslims by France, Ghaly calls on all people in Mali to “reject the manifestations of fragmentation and division, and disavow the fight of ignorance and its blind banners.” In an obvious reference to the many Tuareg militia groups in northern Mali, he urges “all these movements and names, with their different banners and purposes” to repent and join in the jihad against the French. In addition, Ghaly issues a general call to jihad to the French people, telling would-be recruits, “may your explosive belts respond to them, and your directed devices, and your loud car bombs.” He ends his statement by saying that the Muslims must expel the “Crusaders” to “take revenge for honor of our noble Prophet.”

In discussing the peace agreement signed between rival Tuareg groups and Mali in Algeria in May, Ghaly chastises the Tuaregs for “diverting from the road of Tawhid [monotheism].” He goes on to say that while the deal was meant to bring peace, it “smells of apostasy and disbelief, and treason and cunning.”

Ghaly also sends his “distinguished greetings” to the mujahideen in “Sikasso, Macina, Sevare, Giwanzer, Timbuktu, Kidal, and others from the frontlines of jihad and martyrdom.” Sikasso and Macina, which are in southern Mali, were the scenes of two attacks conducted by Ansar Dine earlier this year. The attacks in southern and central Mali undertaken by the jihadist group were likely executed by its Fulani front, the Macina Liberation Movement. The mention of Sevare is a reference to the hotel siege perpetrated by the jihadist group Al Murabitoon, which is openly loyal to al Qaeda, in early August.

Ghaly is not the only jihadist to have threatened Western forces in Mali this year. A fighter from the aforementioned Al Murabitoon threatened French and Dutch forces in Mali, espousing the same rhetoric as Ghaly. “The time has come to battle the French and the Dutch, to retaliate for your Prophet,” said an Egyptian jihadist affiliated with the group. [For more information, see Threat Matrix report, “Al Murabitoon threatens French, Dutch forces in Mali in new audio.]

Ghaly has had a long history of rebellion in Mali. Before being radicalized, he led a Tuareg rebellion against the government in 1990. In late 2011, Ghaly formed the jihadist group Ansar Dine. During the Tuareg rebellion in 2012, Ansar Dine worked alongside AQIM, the Movement for Oneness and Jihad in West Africa (MUJAO), and Tuareg groups to take over the country’s north. The three jihadist groups then quickly pushed the Tuaregs out of the areas that they controlled.

AQIM views Ansar Dine as its local arm in Mali; in a “confidential letter” from Abdelmalek Droukdel, the emir of AQIM, that was found in Timbuktu in early 2013, he instructed his followers to mask their operations and “pretend to be a ‘domestic’ movement” under Ansar Dine so as not to draw international attention and intervention. However, the jihadists’ heavy-handed tactics and violence prompted the French to intervene to help the Malian government take back the north.

Soon after its successful offensive in the north, Ghaly was reportedly seen meeting in Timbuktu with senior AQIM leaders Abu Zeid (who was killed in 2013) and Yahya Abu al Hammam. Mokhtar Belmokhtar, a veteran al Qaeda commander who now leads Al Murabitoon, was also present during the meeting. [For more information on Ghaly, see LWJ report, Ansar Dine leader resurfaces, urges expulsion of France from Mali.]

On Feb. 26, 2013, both the United States and the United Nations added Ghaly to their lists of Specially Designated Global Terrorists. The State Departmented noted that he “cooperates closely with al Qaeda in the Islamic Maghreb.” [See LWJ report, Emir of Ansar Dine added to US, UN’s terrorist lists.] Ansar Dine itself was identified as a terrorist organization by the US and the UN in March 2013.

Despite the French intervention and the current French-led counterterrorism mission in the region, al Qaeda and its many affiliates in Mali continue to operate. These groups retain the ability to mount rocket, mortar, and IED attacks on UN and French forces. Over 50 UN peacekeepers have been killed in Mali since 2013, making it the most dangerous UN mission in the world.