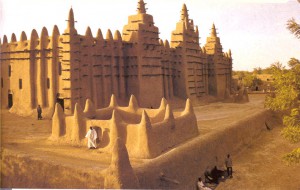 The doors of a revered 15th-century mosque hacked apart by jihadists in Mali’s ancient city of Timbuktu four years ago were unveiled Monday restored to their former glory.

The “secret door” of the Sidi Yahia mosque in the fabled caravan city fell victim to a spree of destruction in 2012 by Al-Qaeda-linked Ansar Dine, one of several radical Islamist groups which seized key northern cities that year.

Around 100 Malian political and religious leaders, diplomats and representatives from world heritage body UNESCO gathered for a ceremony, held with a heavy security presence, an AFP journalist at the scene reported.

“This is a very important day,” said the mosque’s imam, Alphadi Wandara.

“Since (the days) of our forefathers, for centuries the door has been like that: closed.”

Muslim prayers were recited for the mosque, which has been on UNESCO’s list of world heritage sites since 1988.

Former teacher Ahmad Al-Faqi Al-Mahdi, who took part in wrecking Timbuktu’s holy shrines as well as the mosque’s doors, is currently awaiting a sentence on war crimes charges in The Hague for his actions.

Sidi Yahia was among several sites in Timbuktu attacked by Ansar Dine, which considered the city’s mausoleums idolatrous according to their strict interpretation of Islam.

Timbuktu youth leader Salah Maiga told AFP he had witnessed the jihadists’ campaign with his own eyes.

“For us it is a symbol, which was destroyed in plain view,” he said.

“We were there with these barbarians, these lawless people without religion, who claim to speak in the name of Islam,” Maiga added, saying he hoped for justice in Mahdi’s case.

Mahdi has admitted the charges against him and prosecutors are asking for a jail term of 11 years at his sentencing on Sept. 27.

Ansar Dine picked out Mahdi to head its “Hisbah” brigade, which policed infractions of Islamist behavior in Timbuktu.

Revered as a center of Islamic learning during its golden age in the 15th and 16th centuries, Timbuktu in northern Mali is also known as the “Pearl of the Desert.”