You are here: Home / Africa / Mali troops get reacquainted with lost north 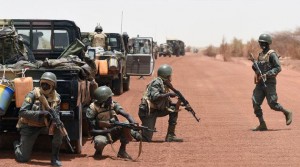 For Malian troops making their first forays into the country’s north since jihadists took control, French military support provides reassurance at a time when they are strangers in their own back yard.

Islamist militias linked to Al-Qaeda — some foreign fighters but most homegrown jihadists — seized the vast expanse of desert in 2012, effectively kicking out the Malian military and government.

France came to the aid of its former colony in January 2013, leading an international military mission called Operation Serval to oust the extremists.

But much of the north has remained largely off-limits to domestic troops amid an ongoing jihadist insurgency and attacks by a variety of other rebel groups fighting for land and autonomy.

Following the success of Serval and its more widely-focused successor, the Sahel-wide Operation Barkhane counter-terrorism mission, the Malian army is making tentative steps back into its desert hinterland.

Hopes for peace in the region were boosted on Friday when Mali’s main Tuareg-led rebel movement, known as the CMA, announced it would sign a final deal to end the conflict in the west African nation on June 20.

The French recently launched operation “La Madine 3″, a reconnaissance mission to help Mali’s military begin to get reaccustomed to an expanse of desert the size of Texas which has become an alien land.

The 30 or so French soldiers based near Timbuktu airport joined Malian troops at their barracks, but French commanders insisted they did not want to step on any toes — just provide help where it was needed.

– ‘The French see everything’ –

“We are here to help you,” French Lieutenant Colonel Zlatan told Malian Captain Cheikh Bayala, a commander of 70 men.

“It’s up to you to tell us when we leave, when we stop. We are behind you if there is a problem but I will not command your men.”

Malian leaders say that the French forces give the local troops a sort of security supplement.

“Even if the jihadists receive reinforcements from the neighbouring countries, which is often the case, the French see everything with their planes and satellites,” said Bayala.

“If they see enemy vehicles arriving, they can warn us, send their helicopters and that’s good,” he told AFP.

“This cooperation with the French shows us our limits, while at the same time giving us a feeling of security,” said Captain Hamadou Traore, a doctor for the Malian patrol.