Desert city in Mali formally receives keys to shrines to Muslim saints after they were rebuilt with Unesco funding following damage in 2012. 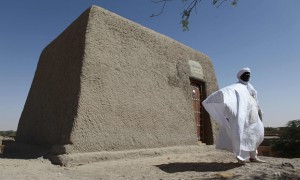 Timbuktu has celebrated the recovery of its historic mausoleums, destroyed during an Islamist takeover of northern Mali in 2012 and rebuilt thanks to the UN cultural agency, Unesco.

The desert city formally received the keys to the shrines to Muslim saints at a ceremony on Thursday in the Djingareyber mosque. Five head of cattle were ritually sacrificed just after dawn before a reading of the entire Qur’an and the handing of the keys to the families in charge of the shrines’ care.

Al-Qaida-linked insurgents wrecked 14 of the city’s earthen shrines, which were built during Timbuktu’s 15th- and 16th-century golden age as an economic, intellectual and spiritual centre.

Unesco representative Lazare Eloundou told the officials, diplomats and religious and traditional dignitaries attending the ceremony: “This day celebrates the remarkable and courageous work accomplished to recover your dignity.”

Islamist fighters destroyed the centuries-old shrines after seizing the city in April 2012, when they implemented a version of Islamic law that forced women to wear veils, with whipping and stoning as punishment for transgressions.