You are here: Home / Africa / Mali: Terrorist groups, their allies “will do everything” so that agreement is not implemented 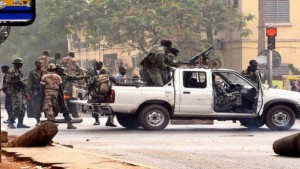 Minister of State, Minister of Foreign Affairs and International Cooperation Ramtane Lamamra said that the terrorist groups and their allies “will do everything” so that Mali’s agreement is not implemented, while it has started to “show results.”

“Obviously, there are challenges: a criminal economy has emerged in the north of Mali, whose supporters, allies of terrorist groups, will do everything so that the agreement is not implemented,” said Lamamra in an interview with the French newspaper le Monde.

The minister expressed satisfaction that the signatory parties of Northern Mali reached “in early October) an agreement, which is a “major achievement.”

“The fact that the signatory parties of Northern Mali who were in an open confrontation have reached an agreement is a major achievement. It helps creating an atmosphere conducive to the implementation of Algiers’ agreement,” he said, underlining that the conference which took place Tuesday in Paris and the State visit paid by Malian President Ibrahim Boubacar Keïta to France, “show that the agreement is starting to show its results.”

In a reply to a question on the Arab “revolutions,” Lamamra pointed out that there is a need for “deep” reforms within several Arab societies, admitting that “it is an acceptable element.”

Citing the example of Libya, he underlined that “the way in which the situation was handled in Libya (in 2011) by the international community, where the previous regime was brought down, didn’t encourage the efforts of those, including the African Union, who working to promote a peaceful and inclusive transition.”