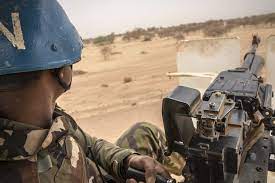 More than 40 jihadists, including a senior commander, were killed last week after they attacked United Nations peacekeepers in northern Mali, the UN force MINUSMA said on Monday, according to news.yahoo.com.

A UN source previously said about 20 of around 100 assailants were killed in a three-hour counter-attack after they raided a camp of Chadian peacekeepers, leaving four troops dead.

But on Monday, MINUSMA chief Mahamat Saleh Annadif said a search of the battlefield on Sunday and Monday showed that the death toll among the attackers was roughly twice this number.

“As of today, we have counted more than 40 dead terrorists, including a right-hand man to Iyad Ag Ghaly, by the name of Abdallaye Ag Albaka,” Annadif told AFP.

Ag Ghaly, a veteran jihadist, is leader of the shadowy Group to Support Islam and Muslims (GSIM) in the Sahel, affiliated with Al-Qaeda.

Ag Albaka, a former mayor of the town of Tessalit, has long had a reputation for being one of Ag Ghaly’s lieutenants, entrusted with a senior military role in northern Mali, the cradle of an insurgency in 2012 that has since spread to Niger and Burkina Faso.

A UN security source, speaking on condition of anonymity, said Ag Albaka was No. 3 in the GSIM organisation.

The attack targeted a Chadian contingent of MINUSMA at Aguelhok in northern Mali, around 200 kilometres (120 miles) from the border with Algeria.

The dawn raid was carried out by a mobile force on motorbikes and in vehicles.

“The peacekeepers have inflicted a serious setback on the terrorists, that’s for sure, even though we are mourning the death of four” peacekeepers, said Annadif, who is also the secretary general’s special representative for Mali.

Four jihadists were captured on Friday and handed over to Malian forces, the security source said.

The UN also said 34 of its troops had been injured. The number of wounded was previously put at 19.

It has lost more than 140 members to hostile acts, the highest death toll of any UN peacekeeping mission. Ten fatalities have occurred this year alone.

The force has been criticised in some quarters for failing to respond aggressively to the insurgency.