Move took place in Dialoubé, a jihadist base in the Mopti region in the centre of the country 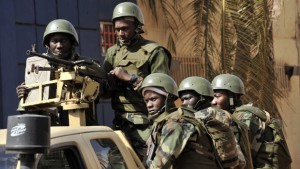 Malian security that moved against jihadists in the centre of the country over the weekend claim to have arrested some 20 suspected Islamist fighters and killed one person.

Five years ago, al-Qaeda seized power in Mali’s second city Timbuktu after hijacking an ethnic Tuareg rebellion in the country’s Saharan north. They grabbed large swathes of land and threatened the capital, Bamako, like reported by ibtimes.co.uk.

France’s 2013 military intervention and UN peacekeeping missions have since returned control of the region to the Malian government, but Islamist groups continue to operate across the vast desert areas in the north.

Several units of the security and defence forces of Mali participated in the recent operation which took place in the locality of Dialoubé, considered a jihadist base in the Mopti region in the middle of the country.

Until the sweep, Dialoubé was under control of the extremists led by radical preacher Amadou Koufa, Malian authorities had no access to the area and schools were closed. Radio France Internationale (RFI) reported the locality of Dialoubé was closed off for 48 hours and mosques evacuated.

Also known as Amadou Diallo, Koufa was a leader of the Macina Liberation Front (MLF), an Islamist extremist group that came to international attention in 2015. MLF is an affiliate of Ansar Dine, a Tuareg jihadist front group for al-Qaeda in the Islamic Maghreb, or AQIM.

A Malian military source is quoted by RFI as saying: “It was from the village of Dialoubé that the same jihadists were carrying out operations against the Malian army, as well as elected officials or religious leaders who openly advocated moderate Islam.”

Officials claim to have uncovered weapons caches, seized motorcycles and arrested around twenty suspected jihadists as suspected terrorists fled. Officially, the army forces said they killed a Dialoubé resident, who menacingly refused to stop at a checkpoint.

Several people are currently reported as “missing”. Authorities are yet to comment.

Al-Qaeda-linked groups have recently been moving into previously untouched parts of Africa, as Islamist terrorists seek to gain exposure in the Sahel, and neighbouring Burkina Faso, with which Mali shares a porous border .