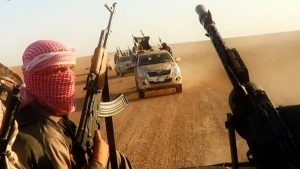 A militia in Mali claims it found the vehicle used by four American soldiers killed in an ambush by Islamist militants in neighboring Niger last fall. The discovery indicates how fighters linked to the Islamic State likely traveled between the two countries, like reported by usatoday.com.

As the militia of ethnic Tuareg soldiers discuss how to return the vehicle to U.S. authorities, the Islamic State is pushing deeper into this poor, West African country and raising fears of more violence.

Mali’s minister of foreign affairs, Tiéman Hubert Coulibaly, said he was concerned that the Islamic State, also known as ISIS, would redeploy to Africa as the U.S-led coalition quashes the terrorist group in Iraq and Syria.

“The current momentum in the Middle East can have consequences for the stability of Mali” and the surrounding region here, Coulibaly said.

Mali already has an active chapter of al-Qaeda, which drove a car bomb into a military base near Timbuktu on April 14, killing a United Nations peacekeeper and wounding seven French soldiers.

“Three days don’t go by without hearing the news of an assassination by the terrorists,” said Hamady Touré, a commercial spice salesman. “The worst thing is that vehicles carrying civilians drive on explosive devices that the terrorists place.”

Those concerns mount despite an international response to the terrorist threat in Mali. The U.N. sent 15,000 peacekeepers to Mali five years ago. France has 4,000 troops in this former French colony. Five nearby countries — Burkina Faso, Chad, Mali, Mauritania and Niger — created a joint force of 5,000 troops to secure their borders against militants.

The Tuareg militia that claims it found the Americans’ four-wheel-drive Toyota in March also said it is an important defense against ISIS.

“The main target of these armed terrorists is none other than the local authorities and religious leaders,” said Fahad Almahmoud, a Tuareg militia spokesman.

The Tuareg soldiers are now allies of Mali’s government, but until three years ago they fought against the regime for an independent country.

Tiébilé Dramé, an opposition politician, said the government shouldn’t depend on militias and needs to do more. He said more terrorists appear to be moving into Mali despite the international help, so ordinary citizens see little reason to believe in their leaders.

“The fault is the current governance is bad,” Dramé said. “More than 500 schools are closed in the center of the country because of poor security.”

Mali’s security situation has been precarious the past several years. In November 2015, heavily armed gunmen stormed the Radisson Blu hotel in Bamako, the Mali capital, killing 20 people. A year ago, several local extremist groups announced they had banded into a bigger organization affiliated with al-Qaeda.

A U.N. report in March said the militias here have too much power. The report said the Tuaregs and another militia allied with the Malian government conducted extra-judicial executions, made illegal arrests, recruited child soldiers and had other human rights violations in northern Mali.

“It is necessary that both the government and the armed groups investigate serious violations and abuses of human rights and international humanitarian law,” said Mongi Hamdi, a U.N. special representative in Mali when the report was published. “This is in the interest of victims’ rights and for the reconciliation and establishment of a lasting peace in Mali.”

In the south, Mali’s army and the Dozo — traditional armed hunters who act as an independent defense force — have been accused of similar abuses against the Fulani ethnic community, a Muslim group often loyal to extremists.

Malians and Fulanis lived together in harmony for centuries but are now poised to kill each other, Cissé said. He said terror attacks have also driven the indigenous Dogon people to create self-defense militias. Dogon and Fulani groups have clashed as a result.