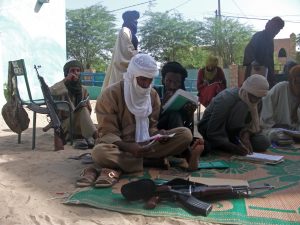 A U.N. expert warns Mali’s efforts to implement the Bamako Peace and Reconciliation agreement remain under threat from extremist groups who are destabilizing the country. The Independent expert has presented his report on the situation in Mali to the U.N. Human Rights Council, like reported by voanews.com.

Suliman Baldo recently visited Mali and says progress is being made in implementing the peace and reconciliation agreement. But he says the deteriorating security situation in the country is setting back prospects for peace.

He says his visit to Mopti in the central region was disquieting. He says the security situation there is very precarious. Baldo says he was informed people in various parts of the region are living in fear and are constantly exposed to the risk of targeted assassinations and armed attacks by extremist, radical groups. He speaks through an interpreter.

“They try to impose their own interpretation of Islam, which is very restrictive,” said Baldo. “They terrorize the population and punish those who are suspected of acting as informants for the Malian authorities or International forces.”

Baldo says International forces including the U.N. MINUSMA are the targets of asymmetric attacks on a daily basis, including the use of improvised explosive devices on roads.

“These violations are serious,” said Baldo. “They include enforced disappearances, summary execution as well as acts of torture and ill treatment. The impact of this insecurity on the local population is really quite dreadful.”

Mali’s Minister of Human Rights, Kadidia Sangare Coulibaly agrees her country is facing increased violent extremism and terrorist attacks and these are leading to grave abuses of human rights. But she says her government is making significant progress in protecting human rights, despite the many security challenges. She says Mali is taking measures to achieve justice and reconciliation and to fight impunity.