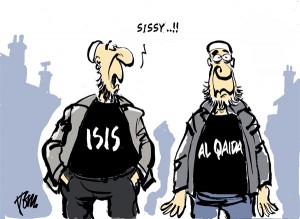 The terrorist attacks in Paris and Mali this past month are signs of a growing rivalry between Islamic State and al-Qaida, each of them vying for global jihadi leadership, an Israeli expert on Africa said on Sunday.

Professor Yehudit Ronen, a leading expert at Bar-Ilan University on Libya and the African Sahel region, said both groups took pride in their respective deadly attacks, in the hopes of reaping greater prestige, more recruits and additional funding.

“The Mali attack demonstrated that the ongoing conflict there is a main focal point of the inter-connected ongoing Islamist insurgency stretching across North Africa and the Sahel environs, particularly neighboring southern Algeria, Libya, and Egypt,” said Ronen, a political scientist and author of the acclaimed, Qaddafi’s Libya in World Politics, published in 2008.

“At the turn of the 21st century, the vast Sahel region, and particularly poverty stricken Mali, became an arena for jihadists, arms smuggling, drug and human trafficking,” she said.

Al-Qaida in the Islamic Maghreb, known by its acronym, AQIM, has become the most powerful jihadist organization in the Sahel area, Ronen said. The group traces its origins to attacks against the Algerian regime during a 1990s civil war.

It expanded its operations to the vast Sahel desert region in 2007, by making contact with the Tuareg population in neighboring northern Mali.

“The shock waves of the Libyan uprising, which eventually brought about the collapse of the Muammar Qaddafi regime in 2011 and the abrupt disintegration of the Libyan army and the security apparatus have created a huge vacuum in Libya and in its geostrategic environs,” Ronen said.

This void was filled by dozens of armed militias vying for power, and the violence has spilled over into Mali and the rest of the Sahel region.

During Qaddafi’s rule, many poverty-stricken Tuaregs in Mali migrated to Libya in search of a better life. He had hastened to mobilize many of them as the Tuareg had a reputation for being fierce warriors.

But with the fall of Qaddafi’s regime, the former Tuareg soldiers became targets of the Libyan rebels and most wound up fleeing back to Mali with all their weapons.

“Upon their return, the Tuareg returnees established the National Movement for the Liberation of Azawad (MNLA), which sought to form a state in the three regions of Timbuktu, Gau, and Kidal in north Mali.

The area of this land spanned around 800,000 square km, which constitutes 65 percent of Mali’s territory,” Ronen said.

The MNLA has allied with Ansar Dine, an Islamist group linked to al-Qaida.

The Azawad state was a shortlived unrecognized entity. “There were strong rivalries and conflicts of interest between the rebellious Tuareg and eventually the idea of an Azawad state dissipated,” Ronen said.

Ansar Dine was not among the three Islamist militant groups – AQIM, its splinter group al-Mourabitoun and Massina Liberation Front (MLF) – which claimed responsibility for last week’s attack on the Radisson Blu hotel in Bamako, where 20 people died, among them Russians, Chinese, an Israeli, and an American.

The Bamako attack diverted international attention to jihadist organizations active in the northern part of Mali and its geostrategic surroundings.

The al-Mourabitoun is a jihadist group based in northern Mali made up mostly of Tuaregs and Arabs.

French troops and the 10,000-strong UN force, known as MINUSMA, are struggling to stabilize Mali, a former French colony.

The UN Security Council renewed the mandate of the MINUSMA force in June in the hope that it could enforce a peace deal signed that month in the West African nation, despite suffering the highest rate of losses of any active peacekeeping mission.

The deal, signed by both proand anti-government Tuareg-led militias, envisaged the overhaul of the Malian army to incorporate the militia fighters and its return to the desert north, much of which is controlled by the Tuareg groups.

Islamist militants linked to al-Qaida seized the desert in 2012 but were scattered by a French military operation a year later.