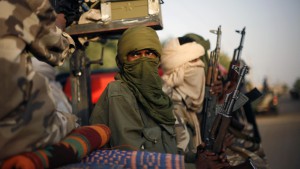 Mali’s pro-government militias have withdrawn from the flashpoint town of Anefis but are pushing northwards to another settlement, the United Nations mission (MINUSMA) said on Tuesday.

Mediators are struggling to make armed groups in Mali’s desert north abide by the terms of a U.N.-backed June peace deal which seeks to turn the page on decades of Tuareg rebellions since independence from France in 1960.

The departure of the Platform coalition from Anefis comes after weeks of pressure from Western donors, MINUSMA and even from the Malian government following a series of clashes there last month that killed at least 20 people.

“MINUSMA congratulates itself on the retreat yesterday of members of Platform from Anefis and its surroundings,” MINUSMA said in a statement. “However, MINUSMA is extremely concerned about the northerly movement of Platform towards Aguelhok.”

It added that the Tuareg separatist alliance known as Coordination of Azawad Movements (CMA) were also moving into new territory and urged both sides to revert to June positions.

Security sources say that the battle for positions among the groups led by rival Tuareg leaders is motivated partly by competition for desert trafficking corridors for both cocaine and legal goods like food and cigarettes.

Expansion may also benefit armed groups if the peace deal proceeds as key army posts and development funding are expected to be distributed to local communities.

Medhi Ag Almoubareck, spokesman for Platform’s largest group GATIA, said troops were heading towards the town of Aguelhok to visit family members. He said they had been instructed not to touch the CMA stronghold of Kidal, a move likely to trigger a major riposte from separatists.

CMA spokesman Attaye Ag Mohamed said they did not yet have confirmation of the departure of Platform troops from Anefis and condemned their spread further north.