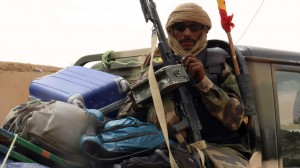 Fighting erupted between rival armed groups near Mali’s desert border with Algeria on Thursday, reportedly taking at least 15 lives in a fresh violation of a U.N.-backed peace deal.

Militias in the border region signed a long-awaited peace accord in June after months of negotiations, but mediators are struggling to make them abide by its terms.

The two sides, led by Tuareg warlords from opposing clans, clashed in August near the town of Anefis, leaving 20 dead.

“Fighting resumed this morning in Inafarak where pro-government militias arrived recently to prepare an offensive against the CMA,” said Attaye Ag Mohamed, a representative of the separatist Coordination of Azawad Movements.

He said 15 fighters died, including 13 from pro-government militias. Around 70 pickups from the Platform pro-government alliance remained in the area and there was a risk of new violence on Friday, he added.

Medhi Ag Almoubareck, spokesman for Platform’s largest group GATIA, said its fighters were assaulted by the CMA early on Thursday and had fought back. He said 17 fighters died of which 14 were from CMA.

“We received reports that an exchange of fire took place there but ceased shortly after,” said Radhia Achouri, spokeswoman for the U.N. mission to Mali. None of its troops were nearby to verify the reports directly.

The renewed fighting has dashed mediators’ hopes that the peace deal would bring a measure of stability and allow the government and supporting regional and Western powers to focus on combating Islamist militants also active in the area.

Security forces say that the battle for positions among armed groups is motivated partly by competition for control of smuggling routes through the desert to Algeria and Niger, used cocaine and arms dealers as well as traditional traders.

Mali’s Tuaregs have risen up four times since Mali’s independence from France in 1960 and are seeking more autonomy for the northern region they call Azawad.

Islamist militants briefly seized the north alongside Tuaregs in 2012, but were forced to retreat by an offensive led by French troops.