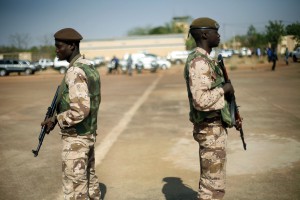 Mali President Ibrahim Boubacar Keita warned the United Nations on Friday that the failure to fully implement a nationwide peace accord was helping al-Qaeda and Islamic State-affiliated groups spread their influence in the country.

U.N. peacekeepers are deployed across northern Mali to try to stabilize the vast region, which was occupied by separatist Tuareg rebels and al Qaeda-linked Islamist militants in 2012 before France intervened in 2013. Tit-for-tat violence between rival armed groups has distracted Mali from fighting Islamist militants and the country has become the deadliest place for U.N. peacekeepers to serve.

“We have to admit that several factors are contradicting our will and effort,” Keita told a high-level meeting on Mali at the annual United Nations General Assembly. “In particular the extension of terrorism and banditry in the center of our country which is even putting into question the stability and security of neighboring countries because of the desire of terrorist groups affiliated to al-Qaeda and Islamic State seeking to expand.”

Keita said Islamist militants were using the slow implementation of peace accords to “manipulate” and “destroy” links between different ethnic groups in Mali.

A clash in the north this week between pro-government Gatia militia and the Tuareg separatist Coordination of Azawad Movements highlighted the fragility of a U.N.-backed deal signed last year between the government and northern armed groups meant to end a cycle of uprisings.

“We must redouble our efforts,” Algerian Foreign Minister Ramtane Lamamra, whose country leads mediation efforts in Mali, told the meeting. “It’s terrible that signatories of the accord are involved in the fratricidal killings.”

French Foreign Minister Jean-Marc Ayrault, whose country has thousands of troops spread across West Africa to hunt down militants, said the security situation was “in general satisfying despite asymmetric attacks.”

On Thursday the international mediation team, which includes the U.N., European Union, African Union and regional bloc ECOWAS said it believed the situation could not continue without compromising the agreement. It threatened international sanctions on those responsible for blocking the deal’s implementation.