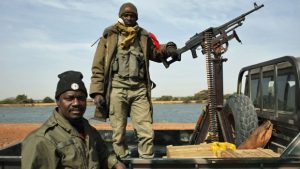 Two civilians and two Malian soldiers were killed Monday in an attack blamed on jihadists in the country’s restive north.

Mali’s defence ministry confirmed two soldiers were killed and two injured during the assault by armed men close to the village of Fafa, which lies near the border with Niger, like reported by iafrica.com.

Reinforcements were on their way to the area, the ministry said.

A security source reached by AFP from the nearby town of Ansongo said two civilians also lost their lives.

The soldiers were in the area to protect stallholders, according to the same source.

In 2012, Mali’s north fell under the control of Tuareg-led rebels and jihadist groups linked to Al-Qaeda who were largely ousted by a French-led military operation in January 2013.

The implementation of a 2015 peace accord between militias and the government has however been piecemeal, and insurgents who refused to sign the deal are still active across large parts of Mali.

Meanwhile five Malian jihadist groups — most of them with previous Al-Qaeda links — have recently joined forces to create the Group to Support Islam and Muslims (GSIM), raising fears of better-coordinated operations.

The jihadist alliance has already claimed responsibility for an attack that killed 11 soldiers close to Mali’s border with Burkina Faso.