You are here: Home / Africa / Mali: Islamists kill 11 soldiers in ambush, 11 others missing 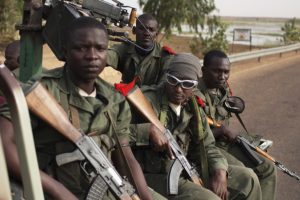 Eleven Malian soldiers were killed and 11 more are missing after Islamist militants ambushed a patrol in the desert north, the army said on Tuesday, like reported by usnews.com.

Fourteen soldiers were also wounded, eight of them seriously, in the attack in the northern region of Gao on Monday, the army said in a statement. It added that seven militants were killed in an ensuing exchange of fire.

Islamist militants, who seized Mali’s desert north in 2012 before being pushed back by French-led forces the following year, have stepped up attacks in the north and centre in recent years. Many are linked to al Qaeda or Islamic State.

Last year was Mali’s deadliest on record due to attacks by the militants, tit-for-tat violence between rival ethnic groups and killings by security forces, according to data compiled by the Armed Conflict Location & Event Data Project (ACLED).

The militants have also used Mali as a base to extend their operations into neighbouring Burkina Faso and Niger, defying attempts by regional, French and U.N. troops to contain them.