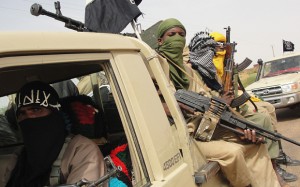 A new Islamist push into central and southern Mali is being led by two charismatic leaders of a new Islamist armed group who cut their teeth in the country’s northern conflict, according to security sources.

In the latest of a series of attacks outside the West African nation’s traditional theatre of combat, two policemen and two civilians were killed on Saturday in the village of Bi, near the south-east border with Burkina Faso.

Investigators blamed the Macina Liberation Front (FLM), a new group that emerged earlier this year and has claimed responsibility for a number of attacks, some targeting security forces in central Mali.

The FLM, led by radical preacher Amadou Koufa, draws its support from the local Fulani people, and is linked to Ansar Dine, one of the Islamist groups that briefly took control of Mali’s vast arid north in 2012.

Students in the art of guerilla warfare under the Tuareg warlord Iyad Ag Ghaly, Ansar Dine’s leader, they returned to their respective homes, recruiting trainee jihadists from their own communities.

“We are actively looking for them. They are in contact with Iyad Ag Ghaly to sow terror in the centre and south of the country, but we have already dismantled a major part of these groups, which operate in tandem,” a police commander told AFP.

Seven Malian jihadists arrested in August in neighbouring Ivory Coast and extradited admitted being members of Khalid Ibn al-Walid, according to a source close to the case, and to having taken part in jihadist attacks in southern and central Mali.

Their confessions led to the arrest of three men at the beginning of September, presented as the masterminds of recent attacks in the capital Bamako against a United Nations residence and several security posts.

The backgrounds of the three suspects points to their links with the Islamists of the north, say investigators.

One, aged 35, is said to be the “number two” in the FLM and, significantly, a former member of the “Islamic police” in the northern city of Timbuktu during the Islamic rebels’ occupation, alongside Souleymane Keita.

A large consignment of weapons was found at the home of another, a 33-year-old, considered the attackers’ logistics expert.

Mali’s decades-old Tuareg-led rebellion teamed up with armed Islamist extremists in the north in 2012 and declared independence for Azawad, the name they give their homeland, but the alliance was short-lived.

More interested in sharia than independence, the al-Qaeda-linked groups overpowered the Tuareg and planted their own black flags across the north, ruling with brutal repression until France sent in 4,000 troops in January 2013 to drive them out.

But swathes of land remain still outside the control of Malian and foreign forces.

Long concentrated in the north, jihadist attacks have spread since the beginning of the year to the centre, and then from June to the south, said Human Rights Watch.

According to investigators, fighters from both groups are able to move discreetly and silently across the country.

“Since most have black skin, they travel unarmed down to the south, so as not to arouse suspicion. Once there, they manage to get hold of weapons and conduct operations,” one told AFP.

Koufa and Keita exert a great influence among the disenfranchised, mainly impoverished youth of their regions, according to a defence ministry official.

Koufa, who is hiding out in the Mopti region, near the Burkina Faso border, attracts young Fulani seduced by his fiery sermons broadcast on local radio stations.

In a Fulani-language recording recently obtained by AFP, he called on his followers to target French interests.

“He has promised to all those young people in training in camps in the Mopti region that he would restore the Fulani empire of Macina, creating a Fulani caliphate,” said a security source.

At least ten people have been killed in attacks attributed to the FLM in the last nine months in cities across Mali’s central region.

A Koufa loyalist told AFP he had taken part in an attack on the Hotel Byblos in the central town of Sevare in August that left four UN subcontractors dead.

Both groups planned to kidnap foreign nationals in the south in August but were foiled by intelligence operatives, according to another security source in Mali.