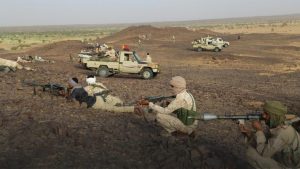 As West African leaders try to find ways to stop jihadist violence in the Sahel region, attention is turning to a rebel-held town in Mali’s north accused of being a base for militants to launch attacks, like reported by dailymail.co.uk.

Kidal, a desert outpost where summer temperatures regularly soar above 40 degrees (104 Fahrenheit), has been mainly ruled by Tuareg separatists since a 2012 rebellion.

The state’s weak presence in northern Mali has allowed jihadist groups, including a local branch of the Islamic State group, to establish a foothold in this vast, arid domain.

With Niger to the east and Algeria in the north, the area has also become a hub for people and weapons smuggling, with border clashes regularly claiming lives.

In a sign of his frustration, Nigerian President Mahamadou Issoufou publically criticised the situation earlier this month.

Standing beside his Malian counterpart Ibrahim Boubacar Keita, at the Koulouba presidential palace, he pointedly said “the status of Kidal is a threat”.

Stability in the Sahel, he warned, is in danger.

For the Mali government, whose overtures to bring Kidal back into the fold have not gone well, it is a major security and diplomacy issue.

The country has been in turmoil since Tuareg-led rebels and radical Islamist militants seized control of the north in 2012.

The rebels signed a peace treaty in 2015 but have remained resistant to handing back full control to the government.

Despite the presence of a nearby French military base and UN forces, the Tuareg and other groups have clung to their autonomy.

Plans for a monitoring committee, which oversees the 2015 peace treaty, to hold a symbolic meeting in Kidal this week were postponed — a sign of anxiety over the town.

Kidal has become an “obvious rear base and launching pad for several terrorist operations,” Maman Sidikou, the Permanent Secretary of the G5 Sahel group, said this month.

The G5 Sahel is a five-nation joint taskforce created in 2014 to try to tackle jihadist violence in the region, backed by former colonial power France.

It has pooled troops from Burkina Faso, Chad, Mali, Mauritania and Niger in a bid to drive back the jihadist groups.

But a lack of finance, training and equipment has limited the group’s effectiveness.

Concerns have heightened since an attack by suspected Islamist extremists on a military base in western Niger in July, which left 18 soldiers dead.

“Many in the Nigerian government think the attackers are from a Co-ordination of Movements of Azawad (CMA) base,” Ibrahim Yahya Ibrahim from the think-tank International Crisis Group said.

The CMA contains members who rose up against the state in 2012, but ultimately signed the 2015 peace treaty with the aim of reintegrating into the army, or civilian life, and accepting control from Bamako.

But the CMA and other groups have resisted handing back full control to the government, and clashes with pro-government armed groups have flared despite the ceasefire.

After meeting in Burkina Faso’s capital Ouagadougou on Saturday, West African leaders announced a billion-dollar plan to fight the rising problem of jihadist violence in the region.

“The escalation of violence has led to an unprecedented humanitarian crisis” in the Sahel, he said.

The meeting, of the Economic Community Summit of West African States (ECOWAS), also called on states “not to accept that terrorists use their territory as a sanctuary or base to fall back on”.

Some interpreted that statement as a dig at Mali and the insecurity in Kidal.