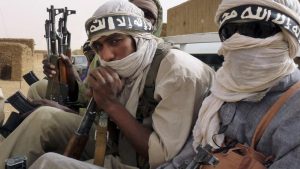 Islamic terrorist groups killed 17 civilians during an attack in northern Mali, near the border with Niger, members of the Tuareg militias informed today, like reported by plenglish.com.
The Movement for the Salvation of Azawad (MSA), in a joint statement with the Self-Defense Force of Tuareg Imghad and Allies (Gatia), explained that the attacks occurred in the towns of Tindinbawen and Taylalene.

According to the source, people were burned alive in their homes and the attackers took properties belonging to local residents.

On April 27, alleged fundamentalists killed about 43 Tuareg on the border between Mali and Niger, and according to MSA and Gatia, they are the same attackers.

For their part, government sources indicate that the perpetrators of the aggression against Tindinbawen and Taylalene were part of a group that calls itself the Islamic State in the Greater Sahara, led by Adnane Abou Walid Sahraoui, a former member of Al Qaeda in the Islamic Maghreb.

In June 2015, the Malian government signed a peace agreement with some armed groups, but other insurgents remain active, linked to the trafficking of drugs, arms and migrants in the Sahel region.