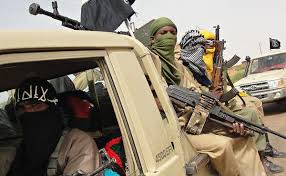 Insurgents conducted attacks against two military posts in the Mopti region of Mali near the border with Burkina Faso, killing at least two civilians and burning 22 vehicles, the army and local officials said according to thedefensepost.com.

Two military posts were attacked early Monday, September 30, the Malian Armed Forces (FAMa) tweeted. A post at Mondoro was attacked around at 1 a.m, followed by an assault on a post at Boulkessi – also spelled Boulkessy – at 4:30 a.m., FAMa said. Boulkessi is around 70 km (40 miles) east of Mondoro.

Minister of Communication Yaya Sangare later said in a statement that a FAMa camp at Boulkessi and a military post at Mondoro had been the “subject of a violent jihadist attack.”

No precise casualty toll was available, Sangare said, but the government deplored the “heavy loss of equipment and significant damage.”

“A large-scale air operation was carried out in the area, to neutralize the attackers and regain effective control of our positions,” Sangare added.

“Armed jihadists came at night to Mondoro. They went to the command post of the camp … and fired. The army withdrew. The jihadists’ fire killed two civilians and wounded three,” a local official said.

“The assailants made off with two vans filled with ammunition, two camels and 12 cows,” the official added.

The regional G5 Sahel Joint Force said in a statement that a position at Boulkessi manned by personnel from a Malian battalion attached to the force was attacked by presumed members of Ansar ul Islam.

They came on “several vehicles loaded with heavy arms and on motorbikes,” the statement said, without giving any casualty figures.

A military source told AFP the attackers burnt 22 vehicles, nearly half of the automatic weapons in the camp and a large cache of ammunition.

On March 1, nine Malian soldiers attached to the G5 Sahel Joint Force were killed in Boulkessi when a vehicle in which they were traveling was struck by a roadside bomb.

A 2018 investigation by the U.N. mission in Mali concluded that Malian soldiers attached to the G5 Sahel Joint Force executed 12 civilians at a market in Boulkessi in May 2018.

Many armed groups are active in Mali and the wider Sahel region, including Ansar ul Islam, which emerged near the Burkina Faso-Mali border in December 2016. Most insurgent attacks are attributed to the Group to Support Islam and Muslims (JNIM) which formed in March 2017 from a merger of several smaller groups including the Sahara branch of al-Qaeda in the Islamic Maghreb, Ansar Dine and Al-Mourabitoun. JNIM’s leadership has pledged allegiance to al-Qaeda leader Ayman al-Zawahiri.

Islamic State-affiliated groups are also active. Since May, ISIS has attributed insurgent activities in the Mali-Burkina Faso-Niger tri-border area to its West Africa Province affiliate, rather than to what was previously known as Islamic State in the Greater Sahara.

In 2012 a Tuareg separatist uprising against the state was exploited by Islamist extremists linked to al-Qaeda who took key cities in the desert north of Mali.

France began its Operation Serval military intervention in its former colony early the next year, driving the jihadists from the towns, and the MINUSMA peacekeeping force was then established.

But the militant groups morphed into more nimble formations operating in rural areas, and the insurgency has gradually spread to central and southern regions of Mali and across the borders into neighboring Burkina Faso and Niger. Large swathes of Mali remain outside government control, and inter-ethnic bloodshed is a regular occurrence.

The Serval mission evolved in August 2014 into Operation Barkhane, which has a mandate for counter-terrorism operations across the Sahel. Roughly 4,500 French troops are deployed in the region, including around 2,700 soldiers in Mali. Personnel from Estonia and helicopters from the United Kingdom support the Barkhane force, and Denmark has announced plans send two helicopters and up to 70 troops.

France spearheaded the G5 Sahel initiative, but it has been undermined by lack of training, poor equipment and a shortage of funds. United Nations Secretary-General Antonio Gutteres has long-called for regular U.N. funding for the G5 Sahel Joint Force, but the U.S. has pushed back against direct funding, preferring instead bilateral funding for individual states.