You are here: Home / Africa / Mali insurgent group accepts cease-fire but with conditions 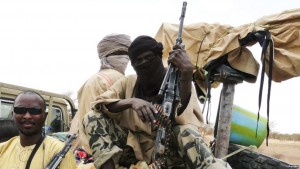 Mahmoud Dicko, president of Mali’s Islamic High Council, told VOA’s French to Africa service on Sunday that he asked Ansar Dine for the truce and received a letter of acceptance from the group’s leader, Iyad Ag Ghali.

Dicko, in a phone interview, noted that Ghali’s letter included a line saying Ansar Dine “rejects whoever rejects Sharia.” It was not clear if Ghali was setting a condition for the cease-fire.

Ansar Dine was one of three Islamist militant groups that took control of northern Mali in 2012. The groups were ousted in a French-led military operation the following year, but have since continued to attack civilian, military and U.N. peacekeeping targets in the region.