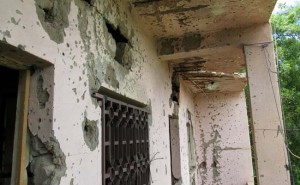 A deadly hostage drama at a Mali hotel in which 13 people died — including five UN workers — was claimed today by fighters linked to the notorious one-eyed Algerian jihadi leader Mokhtar Belmokhtar.

A radical associated with militant Malian Islamic leader Amadou Koufa said he gave his “blessing” for the attack on the Byblos Hotel in the central town of Sevare.

Koufa has ties to Belmokhtar — known as “The Uncatchable” — the former head of Al-Qaeda in the Islamic Maghreb (AQIM) who now leads his own extremist Al-Murabitoun group.

“The hand of Allah has guided the mujahedeen of Sevare against the enemies of Islam,” Souleyman Mohamed Kennen told an AFP reporter in Bamako during a brief telephone interview.

The stand-off with the hostage-takers, which began early on Friday, ended nearly 24 hours later when Malian troops stormed the hotel.

Souleyman claimed the group was also behind the killing of three Malian soldiers on Monday when their vehicle hit an improvised explosive device close to Diabozo, near Sevare.

Four other troops were wounded, the government said.

Jihadist attacks long concentrated in the north of Mali — where extremists linked to AQIM still exercise much control — began spreading to the centre of the country earlier this year, even as far south as the borders with Ivory Coast and Burkina Faso in June.

The US said it targeted Belmokhtar in an air strike in the Libyan desert the same month, but AQIM denied reports its former leader had been killed.

Investigators said Monday they found phone numbers and addresses on the bodies of the “terrorists” killed in the Sevare hotel which suggested they were affiliated with the Macina Liberation Front (FLM), a new Islamic extremist group drawn from the Fulani people of central Mali.

“At this stage there is no formal proof that it was the Macina Liberation Front, but strong suspicions point to this group that has been seeking notoriety at all costs,” she said.

But a regional security source told AFP there is “much coming and going between all these groups. In claiming responsibility for the Sevare attack, Souleyman is also speaking for the other jihadi groups,” he said.

The Byblos Hotel was in ruins after the siege with bullet-riddled walls, doors torn from their hinges and sheets and pillows stained with blood, images obtained by AFP showed.

Details of the deadly stand-off emerged on Monday with the family of one of the victims saying he had been sending them messages on WhatsApp during the shootout.

Roelof “Jaco” Janse van Rensburg, a South African rescue worker, managed to message his family from the hotel bathroom where he was hiding for hours as the drama played out, his brother-in-law told AFP.

“He was saying it (was) like a war zone out there,” Cobus Smal told AFP, saying the messages had gone on for hours until his brother-in-law’s phone battery had died during the evening.

“Everybody was hiding, they were trapped in their rooms.”

The family heard nothing until the next afternoon when they were told he was dead.

A Malian military source confirmed that foreign special forces had been involved when they stormed the hotel, without giving further details.

The Bamako government said four soldiers, five UN workers and four “terrorists” were killed. Among the victims were two Ukrainians, a Nepali, a South African and a Malian driver, according to the UN mission in Mali.

The west African country has seen a surge in jihadist violence despite a peace deal signed in June.

The FLM, which emerged earlier this year, has claimed a number of attacks, some targeting security forces in central Mali.

It is considered linked to Ansar Dine — Arabic for “defenders of the faith” — one of the groups that took control of Mali’s vast arid north in April 2012.

Washington added Ansar Dine to its terror blacklist in 2013, accusing it of close ties to Al-Qaeda and of torturing and killing opponents in the north.

Mauritanian news agency Al-Akhbar, which regularly publishes jihadist statements, also said the FLM could be behind Friday’s attack in Sevare.

The town, 620 kilometres (385 miles) northeast of the capital Bamako, is a key staging post on the road to Mali’s vast desert north.

A French-led offensive in 2013 routed Islamist groups from their northern strongholds, but swathes of the desert region remain lawless.