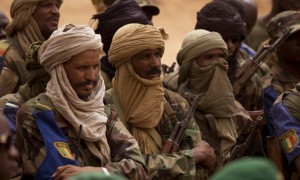 The rebels had refused to sign an initial peace agreement last month, but came on board after their demands were met by the government. Tuaregs seized part of northern Mali, including Timbuktu, in 2012.

The area was taken over by jihadist fighters linked to al-Qaeda, until they were removed in a French-led military operation in 2013.

Tuareg and Arab groups in the north, which is sparsely-populated, includes the historic cities of Timbuktu and Gao. The rebels call the region Azawad and claim they are ignored by the south.

The peace agreement, brokered by Algeria, was not signed initially because the rebels called for more concessions from government in Bamako.

New security plans as well as a development programme for the region will now be agreed. On Thursday, the government dropped arrest warrants against rebel leaders.

The government has also said it is happy to devolve more authority to the region, but not to give it full autonomy.