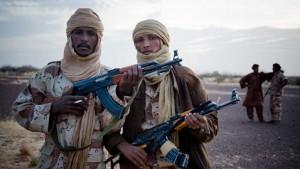 Mali’s government and Tuareg-led rebels agreed on a ceasefire in a strategic town and on more political guarantees on Friday, steps towards a UN-brokered peace accord to end decades of uprisings in the northern region the separatists call Azawad.

Western powers are pushing for a conclusive accord in Mali, fearing that continued instability will allow Islamist militants to return to the north, from where a French military intervention drove them out in 2013.

Mali’s government accepted a broad UN-brokered agreement in March, but the rebel coalition Coordination of Azawad Movements delayed a final signing, saying it fell short of their demands, as fighting continued in the vast desert region.

Implementing any peace arrangement and ceasefire is certain to be complicated, with fighters on the ground divided into various competing factions and splinter groups, and Islamist militants also trying to return.

“There are two texts that we will sign today, one security and one political, that will allow the Coordination to go ahead and sign the final agreement, hopefully on June 20 in Bamako,” Hamdi told Reuters at the signing ceremony in Algiers.

Hamdi said one arrangement called for a ceasefire in the northern town of Menaka and the withdrawal of pro-Bamako armed groups from the area, to be replaced temporarily by UN security before Malian troops would be stationed there.

The text of the agreement calls for the retreat of all rebel forces to 20 kilometers outside Menaka, a strategic town 200 km (125 miles) east of Gao, the largest city in northern Mali.

Pro-government armed groups seized Menaka from Tuareg separatists in April during fierce fighting that has complicated international efforts to get a final peace agreement.

In a sign of splits, pro-Bamako group Platforme, which has signed up for the UN peace deal, rejected Friday’s Menaka security accord, saying its proposals had been ignored.

A second political text addresses some “concerns” by the rebel alliance about the peace deal, including guarantees on issues such as return of refugees, security arrangements and development plans for their region.

After signing the two documents, Malian Foreign Minister Abdoulaye Diop said they created “all the conditions for peace”.

Tuaregs have risen up four times since Mali’s independence from France in 1960 to demand some form of self-rule.

The Algiers document in March proposed more devolved powers for the north, a regional security force and a special development plan. But it left the issue of Azawad’s political identity for a national debate between Malian parties.

Mali’s government rejected any notion of full autonomy for Azawad in a federal system, but said it would devolve more authority under Mali’s existing decentralised structure. Rebels had pushed for a federalist system.