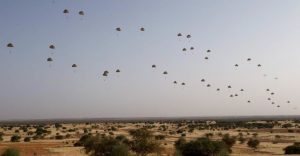 French paratroops conducted an conducted an airborne operation in the Ménaka region of northeastern Mali near the Niger border on Thursday, September 27, like reported by thedefensepost.com.

“Everywhere, all the time, Barkhane is ready to act,” the French Armed Forces said in a Facebook post that confirmed the operation had taken place.

Paratroops from 2nd REP, the 2nd Foreign Parachute Regiment, part of the French Foreign Legion, have been in Mali since June. They are attached to Desert Battle Group – Infantry (GTD-I) deployed to France’s Operation Barkhane in the Sahel.

French journalist Jean-Marc Tanguy, who first reported on the operation, wrote that 80 paratroopers, mainly from the 2nd REP, were dropped by an Airbus A400M Atlas and two C-160s. A GTD-I infantry company was also operating on the ground.

Tanguy says that airborne operations have been conducted several times since the GTD-I was deployed, but this was the first major drop.

Later, citing French armed forces spokesperson Colonel Patrik Steiger, Le Figaro reportedthat 120 paratroopers took part in the operation. Around 80 were dropped from the two C-160s and 40 from the A400M into a region where Malian forces and a company from Barkhane are already present, Steiger said.

“We combine different capabilities to create a surprise effect among armed terrorist groups and to show the population that we are able to come quickly,” Steiger said.

This is the first time that the Airbus A400M military transport aircraft has been used in an operational parachute drop since its adoption by the French Air Force in 2013. The aircraft remains unable to drop parachutes via its side doors.

On September 8, the 2nd REP tweetedthat parachute commandos had undertaken a “high altitude operational jump in the region of Gao in Mali.” Operation Barkhane’s main support base in Mali is in Gao, alongside others in Niamey in Niger and N’Djamena in Chad.

The Menaka area, where Thursday’s drop was carried out, is one of the most unstable in Mali. At least 12 Tuareg civilians were killed by armed assailants in the region, local sources said on September 25.

Philippe Chapleau notes that several skirmishes have taken place in the past week, with several militants killed and three French troops injured. On August 26, a French airstrike in the Menaka region killed a senior Islamic State in the Greater Sahara official, a bodyguard and two civilians.

Islamic extremists linked to al-Qaeda took control of the desert north of Mali in early 2012, exploiting a Tuareg separatist uprising. France began a military intervention the next year that evolved into the current Operation Barkhane deployment with a mandate for counter-terror operations across the Sahel region, encompassing Burkina Faso, Chad, Mali, Mauritania and Niger.

Around 4,500 French personnel are deployed with Operation Barkhane, and they work alongside the G5 Sahel joint counter-terrorism force that aims to train 5,000 troops, as well as peacekeepers deployed to the United Nations Minusma stabilization mission in Mali.

The European Union also has a training mission in Mali. Its mandate was this year extended to May 2020 and expanded to include the provision of advice and training support to the G5 Sahel Joint Force.

The United Kingdom has deployed three Royal Air Force Chinook heavy lift helicopters and 90 personnel to support Operation Barkhane, and Estonia deployed around 50 soldiers who are tasked with ensuring the security of the Gao military base.