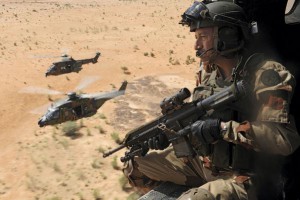 French special forces have killed an Islamic extremist in northern Mali who had been released last year in exchange for the freedom of a French hostage, a Malian official said Monday.

A special operation in the Tigharghar mountains of the Kidal region killed Mohamed Ali Ag Wadossene, said Malian forces spokesman Cmdr. Modibo Nama Traore. A dozen others were also arrested in the operation, he said.

An official with the French special forces, who spoke on condition of anonymity because he was not permitted to speak to the press, confirmed the operation.

Ag Wadossene, a member of al-Qaida’s North Africa branch, was among those who kidnapped Philippe Verdon and Serge Lazarevic from their hotel in northeastern Mali in November 2011.

The al-Qaida in the Islamic Maghreb member was later captured, and then released, in December 2014 for the freedom of French hostage Lazarevic, according to the Malian government. It said it had exchanged four prisoners to secure Lazarevic’s release from the al-Qaida-linked extremist group. Verdon was found shot to death in July 2013.

France insists it pays no ransoms and does not exchange prisoners, although French President Francois Hollande has acknowledged that other countries have done so, “to help us.” In the case of Lazarevic, Hollande credited cooperation of the governments of Mali and Niger.

Hostage-taking is a lucrative business in Mali and other Sahel countries. Al-Qaida in the Islamic Maghreb took numerous Western hostages until France intervened in Mali in January 2013 to rout out extremists.