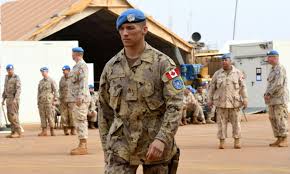 A car-bomb explosion in northern Mali killed three civilians on Monday, and one group reportedly claimed that Canadian soldiers and other foreign forces were targeted, like reported by vancouversun.com.

The Canadian Armed Forces said in an email Monday that it was aware of an explosion in the city of Gao, adding that all Canadian personnel were safe at Camp Castor.

The Ministry of Security and Civil Protection of Mali says on its Facebook page that a trapped vehicle burst into flames in a courtyard in Gao.

The ministry says three people were killed, two were injured and neighbouring homes were damaged.

SITE, an American group that monitors jihadist websites, says an organization posing as al-Qaida’s branch in Mali has claimed “a suicide bomb blast on the headquarters of foreign forces, including British, Canadian and Germans, in Gao.”

A Canadian peacekeeping contingent took over from Germans and Belgians in Mali in early July, and its main task is to evacuate the wounded peacekeepers by helicopter.

Mali has been torn apart by conflict since a rebellion in the north and a coup in the capital in 2012. The turmoil has been aggravated in recent years by poverty, drought and the influx of Islamic extremists.

Dozens of peacekeepers have died in attacks in Mali and dozens more have been wounded since the creation of the UN mission in 2013.