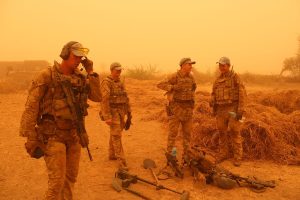 British troops have shot dead jihadists, believed to be Isis fighters, after coming under attack while on a UN mission in Mali – a country facing a fierce insurgency and political upheaval drawing-in rival international powers, like reported by independent.co.uk.

The killings of the two gunmen were the first by regular UK forces since Afghanistan in 2014, and highlighted the dangers in a conflict which has spread across states in the Sahel.

The UN mission, described as the most dangerous peacekeeping operation taking place at present, is carrying on alongside a counter-insurgency operation led by France.

The clash between British forces and the Islamists took place in a remote area in the east of the country where troops from the Queen’s Dragoon Guards were on an operation to find alternative routes to ones which have come under repeated roadside bombings.

The gunmen, carrying a Russian made PKN machine-gun and a Kalashnikov AK-47 assault rifle opened fire on the troops in Jackal armoured vehicles on a track between the towns of Indelimone, where a Malian army base had been overrun by Islamists and Menaka, a regional centre.

The British troops from the Long Range Reconnaissance Group chased the two gunmen into an undergrowth before returning fire with a GPMG (general purpose machine gun) and 40 mm grenade machine gun in a 20 minute exchange, which began at a distance of 10m, on Wednesday morning.

The British troops, contingents from the Queen’s Dragoon Guards and the Royal Anglian Regiment, are taking part in Operation Newcombe under UN rules of engagement which allows appropriate action in self-defence. The intention during the confrontation, say the UK military, was to detain the two gunmen, who fired more than hundred rounds.

The area is the furthest east the UK troops have gone in the 10-month mission as part of expanding their role with helping the UN investigate atrocities committed by armed groups.

Lt Col Will Meddings, the UK commanding officer, said: “Today’s action demonstrates exactly what the UK is bringing to the UN’s most dangerous peacekeeping mission – a long-range force that doesn’t just find those who harm civilians, but acts as well.

“Results like this come from patrolling huge distances, day and night, in places where ISGS (Islamist State in the Greater Sahara) feel they have the freedom to extort and murder, and proving to them that they cannot act with impunity.”

French forces, which are taking the lead in the counter-insurgency war, last month killed Adnan Abu Walid al-Saharoui, leader of the ISGS. As well as Isis, Mali and neighbouring countries have become a haven for al-Qaeda with the jihadist leaders declaring that they had been energised by the Taliban takeover of Afghanistan.

Emmanuel Macron, the French president, however, has announced that the number of French troops would be cut drastically with the end of Operation Barkhane.

The military regime running Mali after two coups in nine months has accused the French of a “lack of consultation” and of “abandoning us in mid-fight”. They are said to be negotiating a $10.7m-per-month deal with the Russian mercenary company, Wagner Group, to replace the French.

France and Germany have warned that they will reconsider their military commitment to Mali if the deal with the company, which is owned by an ally of Vladimir Putin and is accused of committing atrocities in a number of countries, goes ahead. In London, defence secretary Ben Wallace has also spoken about deep concern over the possible involvement of the Wagner Group.