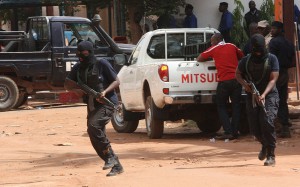 Two Malians who “actively participated” in a deadly Islamist assault on an Ivory Coast beach resort two weeks ago have been arrested, including the right-hand man of the suspected mastermind, security sources said Sunday.

The two were picked up in northern Mali at the weekend for their suspected role in the March 13 gun and grenade assault on three hotels and a beach in Grand-Bassam that killed 19 people.

The arrests were welcomed by Ivory Coast which hailed “international co-operation in the fight against terror”.

The Grand-Bassam rampage, the first of its kind in the Ivory Coast, was claimed by Al-Qaeda in the Islamic Maghreb which has also carried out similar assaults on tourist hotspots in Mali and Burkina Faso.

So far, 15 people have been arrested over the Grand-Bassam attacks, with Ivorian investigators backed by anti-terror specialists and judicial expert from Paris. The United States and Germany are also helping with the probe.

The latest suspects were identified as Ibrahim Ould Mohamed, who was arrested on Friday night, and Midy Ag Sodack Dicko, who was picked up a day later.

“Evidence suggests that they actively participated in the Grand-Bassam attack,” a Malian security source said, with the information confirmed by several other sources.

Ould Mohamed, who was arrested late on Friday in Goundam, 80km southwest of the historic city of Timbuktu, is considered a close confidante of Kounta Dallah, the suspected attacks mastermind.

“He is the driver and the right-hand man of Kounta Dallah, the brains behind the attack. He has provided some interesting information,” a Timbuktu police official said, without giving further details.

Dallah, who is still at large, is suspected of both organising and taking part in the attack, according to the Abidjan prosecutor, who did not give his nationality.

“Ibrahim Ould Mohamed did not hide the fact that he is close to Kounta. He knows many things,” said a source close to the Timbuktu governorate. He will be transferred Bamako later on Sunday.

At least three assailants armed with grenades and assault rifles took part in the attack in which they stormed three hotels in Grand-Bassam, a resort popular with expats that lies 40km from Abidjan.