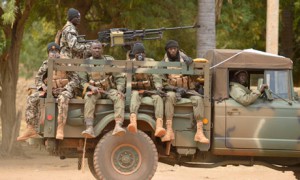 Malian forces arrested five people suspected of involvement in an attack that left 11 soldiers dead, but the release of a former top jihadist sparked outrage among human rights groups.

The latest arrests come as the west African country, which has seen several uprisings since independence from France in 1960, looks to implement a peace deal despite continuing unrest from militant groups and spreading jihadist attacks since the beginning of the year.

According to army spokesman Colonel Souleymane Maiga, the five people detained near the site of Monday’s attack in northern Mali were suspected of links with Al-Qaeda in the Islamic Maghreb (AQIM), the jihadist group that claimed the assault.

One of the suspects was found with a weapon belonging to an officer killed in the attack, a Malian military source said, speaking on condition of anonymity.

Monday’s attack struck a Mali National Guard security post in Ghourma-Rharous, an area around 140 kilometres (90 miles) east of Timbuktu, leaving 11 guards dead and one wounded. It came just days after two Malian soldiers were killed and four others wounded in an ambush in the centre of the country.

Also on Wednesday, 14 human rights groups jointly criticised neighbouring Mauritania’s release of a former top jihadist, labelling it a “blow for the victims of the Malian crisis”.

A Mauritanian security source said the country on Tuesday freed Senda Ould Boumama, the former spokesman of the Ansar Dine militant group who surrendered to the authorities in May 2013.

“The liberation of Senda Ould Boumama by Mauritania is a blow for the victims of the Malian crisis,” the coalition of rights groups, which included Amnesty International as well as multiple domestic organisations, said in a joint statement.

They said Ould Boumama surrendered himself to Mauritania in order to escape Mali’s justice system, and accused him of being among “several alleged perpetrators of the most serious crimes”, including “sex crimes”.

Mali’s north came under the control of Ansar Dine and two other jihadist groups — AQIM and the Movement for Oneness and Jihad in West Africa — in April 2012.

Ansar Dine, which is Arabic for Defenders of Faith, has itself been accused of close links with Al-Qaeda.

A move south towards the capital by the extremists, who imposed a brutal version of sharia law on inhabitants, prompted Mali’s former colonial master France to intervene in January 2013, pounding their positions in the north.

While their organisational structure has been smashed, small pockets of armed Islamists have managed to remain active, and continue to carry out deadly attacks.