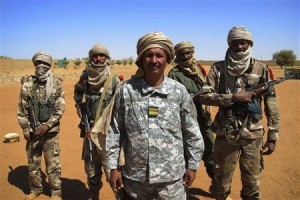 Malian troops killed five gunmen during a clash with an armed group in the central Mopti region, the army and defence ministry said on Wednesday.

Mali’s desert north is home to a number of secular armed groups as well as al Qaeda-linked Islamic militants that briefly held the area until they were scattered by a French military intervention in 2013.

Attacks on Western and Malian targets have increased in recent months and spread further south to the capital Bamako despite peacekeeping efforts by a U.N. mission that took over from France.

Defence ministry spokesman Colonel Diaran Kone did not identify the militant group involved in the latest clash, which took place on Tuesday.

“The toll was five dead on the terrorist side… and one Malian soldier injured,” he said.

Army spokesman Colonel Souleymane Maiga said the army destroyed a base previously used to attack U.N. and army convoys travelling to and from the northern town of Gao.

An army source said the militants were part of a relatively new ethnic Peuhl armed group called the Massina Liberation Front and blamed for a growing number of attacks.

Mali’s government and an alliance of northern Tuareg and Arab rebels are due to sign a long-awaited peace deal on the future of the country’s north at the weekend.